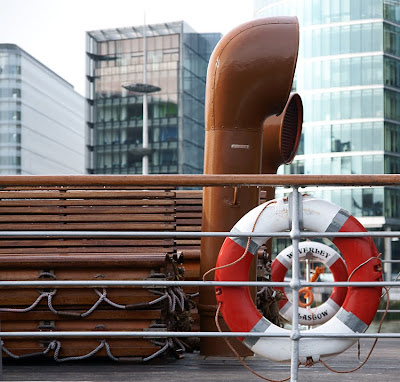 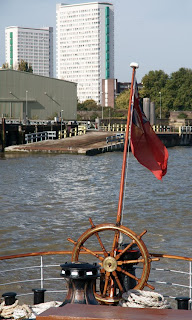 At the weekend, I took a daytrip on the Paddle Steamer Waverley from Tower Bridge to Southend on Sea. There was so much of interest that this week is devoted to a Thames theme - starting, of course, with the boat itself.

PS Waverley is the last sea-going paddle steamer in the world. It travels around the British coast for much of the year, with some of its time spent on the Thames. Such excursions are part of Britain's leisure history: since the nineteenth century, steamer trips have been a popular recreation.

They are certainly a significant, if not always happy, part of London's past. The trip to Southend was particularly popular, and it was very nice to pay tribute to that by arriving at the traditional point: the end of the pier, 1.3 miles from dry land! 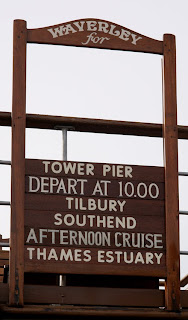 n earlier PS Waverley had been sunk off Dunkirk in 1940; its namesake was built on the Clyde in 1946-7 and for many years worked in West Scotland. However, by 1974 running costs were too high - despite conversion from coal to oil in 1957 - and it was withdrawn from service. The Paddle Steamer Preservation Society bought it for just £1, and after restoration it began its new, nationwide career.

The Waverley can not only take up to 800 passengers, but keep them refreshed in its restaurant and bars. Just as well, then, that it has a 2,100 horse power engine. The journey from central London to the end of Southend's pier took 3.5 hours; Londoners more used to the Thames Clippers will be surprised at the smoothness of the ride! 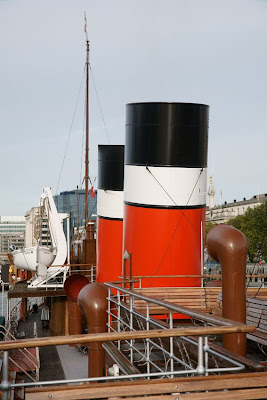 You were lucky with the smooth ride. We took the Southend trip many years ago with a few friends and it was so rough people were being sick everywhere. She hit Southend Pier so hard the sponson was bent. The girls got off and went home by train....

I'm quite surprised that this only took three and a half hours. It's great that initiatives such as this one still exist on the Thames. I wish that similar things existed on the Seine, such as a day trip from Paris to Rouen for example.

Goodness, Chris, I'm glad I missed that trip! Grey skies and the odd downpour hardly count as inconveniences by comparison.

Adam, I love the idea of similar trips on the Seine. Some of the Canauxrama trips seem to offer an interesting alternative to the usual tourist route, at least (although I'm usually in Paris in November when many of them don't run).