If you travel regularly down the New Cross Road, you'll probably have noticed a large shopfront - at number 135 - which hosts ever-changing art displays. It's run by artists Tim Jones and Meena Chodha, who give artists a week each to use the window. It has certainly brightened up many of my bus journeys! 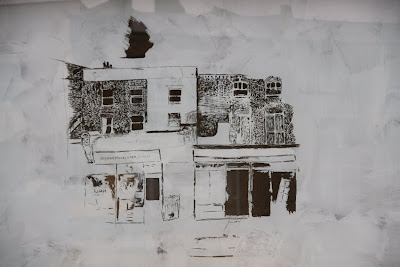 The current resident is Mich Maroney, who is also artist-in-residence at the Creekside Centre. She is making a site-specific drawing on the window itself: it's well under way, and you can see it continue to progress until Friday. Depicting the scene across the road, it is inspired by a quotation from CS Lewis:

In the central castle, in the Empyrean, the Emperor sits enthroned. In the lower heavens live the angelic knighthood. We, on Earth, are “outside the city wall”. How, we ask, can the Empyrean be the centre when it is not only on, but outside, the circumference of the whole universe? Because, as Dante was to say more clearly than anyone else, the spatial order is the opposite of the spiritual, and the material cosmos mirrors, hence reverses the reality, so that what is truly the rim seems to us the hub.

The exquisite touch which denies our species even the tragic dignity of being outcasts by making us merely suburban, was added by Alanus. In other respects he reproduces Chalcidius’ outlook . We watch “the spectacle of the celestial dance” from its outskirts. Our highest privilege is to imitate it in such measure as we can. The Medieval Model is, if we may use the word, anthropoperipheral. We are creatures of the Margin.

You can also follow progress on Mich's blog: a fascinating record of the work which also allows it to be shared by those spared the commute along New Cross Road!