Getting my first letter with a Christmas stamp might sound like a good excuse for a 'Christmas appears earlier every year' rant, but as it's one of the lovely Wallace and Gromit designs I'm not going to complain. 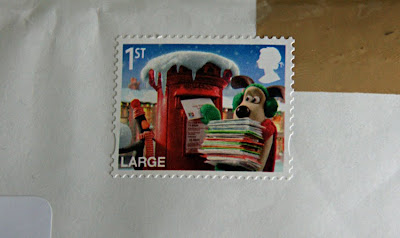 The first Christmas stamp appeared in Canada in 1898, although it's not a proper one. Rather, the words 'Xmas 1898' are simply written along the bottom of a regular stamp. Apparently they were added when the Postmaster General showed the design to Queen Victoria, remarking it would be issued 'on the Prince's birthday'. He had meant to please her, but remembered just in time that she didn't actually like the Prince of Wales very much so when she asked 'which Prince?', quickly improvised with 'the Prince of Peace'. The face-saving word was then added to an otherwise non-seasonal map design.

There's some discussion in the philatelic world about what exactly constitutes a Christmas stamp. However, by most definitions it was only in the mid-twentieth century that proper Christmas designs became common. Britain was relatively late in adopting the custom: there was reluctance for many years to move the Queen's head from the centre of the stamp. At last, in 1964, Tony Benn was Postmaster General and decided that we should have a special Christmas stamp designed by children. The monarch's head became a smaller silhouette in the top corner, a solution used for special issues ever since.

Further reading: the British Postal Museum & Archive has an online exibition, The Post of Christmas Past. For an international view, see the website of the Christmas Philatelic Club (their magazine is aptly named Yule Log).
Further viewing: the stars of this year's stamps are currently on TV in Wallace & Gromit's World of Invention.
- November 04, 2010

Email ThisBlogThis!Share to TwitterShare to FacebookShare to Pinterest
Labels: postal