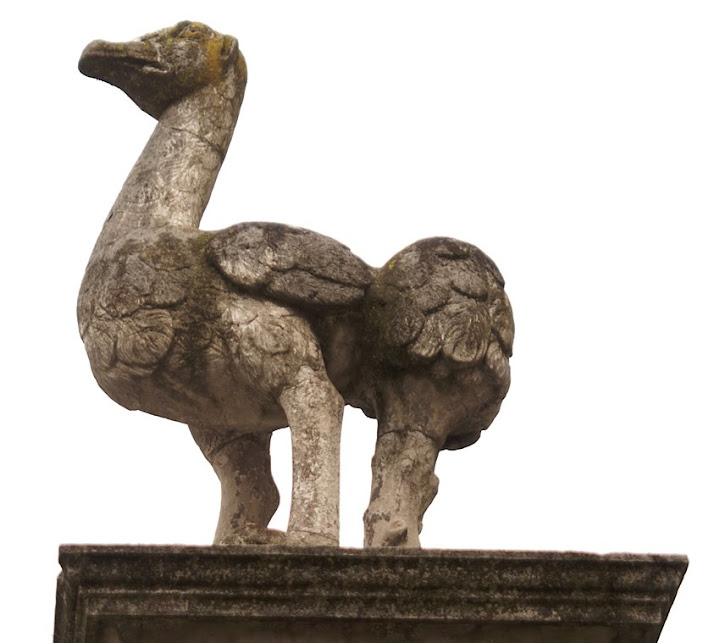 The gateposts of Pallant House in Chichester are topped by unusual ornaments: rather chunky, improbable ostriches. It's no surprise that locally it's known as 'Dodo House' instead!

The original owner of the house in 1711 was wine merchant Henry Peckham, and ostriches featured on the crest of his family coat of arms. However, the money for the house came from Peckham's older, wealthier wife Elizabeth. Its high cost (double the estimate) did little to help their shaky marriage.

Ostriches may seem fairly exotic for an English family, but these African or Arabian birds had long had a place in European culture. They were familiar to the Romans and in more modern times were valued for their skin and extravagant feathers. The Elizabethans prized their eggs, which were also a standard feature of eighteenth-century cabinets of curiosities.

Nonetheless, it's generally assumed that the stonemason who carved these examples had never seen an ostrich. True, they were hardly a familiar sight in Georgian Chichester. Are we being a little unfair, though? After all, a plump bird on long, thin legs poses serious practical problems for the carver so we might also wonder about Peckham's artistic knowledge and common sense.

It's easy to sympathise with the poor mason, faced with a perhaps lucrative but certainly impractical commission, yet not wanting to alienate a rich patron. He may have thought 'never mind. I can always try chunky legs and an odd sort of tree trunk thing to hold the whole thing up. And forget that rather fine plumage, big feathers will get the idea across. The neck needs to be a bit more substantial too. In fact, let's keep the whole thing chunky. I'm sure I can convince him this is a very good heraldic ostrich. '

Perhaps it would have been safer to stick with pineapples...