The Pointe de Grouin is a rocky finger pointing into the sea between St Malo and Cancale, Brittany. Today it's a haven for wildlife, but during the Second World War its extensive views across the Baie de Mont St Michel and the Channel gave it strategic value. It was thus the site of German fortifications: a network of heavy concrete blockhaus (bunkers). Several survive; visible inside the best-preserved are graffiti from 1944. 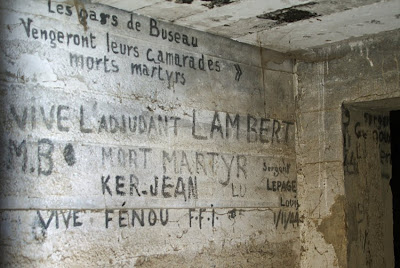 Vive L'Adjudant Lambert mort martyr. These few words refer to a horrific incident carried out by the Milice, a paramilitary organisation of French collaborators.

Broualan, near Dol de Bretagne, was a local centre of resistance activity. By 1944, it hid a transit camp commanded by Adjudant Lambert, a village baker. When a raid on the resistants' camp failed, the Milice returned the following day to the village itself.

Lambert was at his brother-in-law's house when the Milice descended upon the countryside. They searched a number of houses and farms, killing several villagers. Lambert, his brother-in-law and others were seized. Beaten and tortured, they were then taken towards St-Remy-du-Plain. A kilometre or so outside the town, the prisoners were taken out of the vehicles. After crossing a field of oats, they reached a disused quarry where eight of them including Lambert were shot.

Most of the other prisoners were interned but three were released. They told the inhabitants of St Remy what had happened and the mutilated bodies were discovered. In 1945, a monument was erected at the site of the killings; its inscription reads