The temperance movement of the nineteenth century lost ground, literally and metaphorically, in the twentieth. However, at its height this was a significant national and international movement, taken up at all levels of society, which made its mark upon our townscapes as much as upon those who had 'taken the pledge'.

The movement did not only seek to limit the use of intoxicating liquor; it also set out to provide alternatives. These were not limited to the stereotypical cup of tea and hymns around the piano in the church hall. Coffee houses, institutes and hotels proliferated, while London had a number of temperance billiard halls. The rather nice example here is on Battersea Rise. These establishments were popular because they offered a cheap way to enjoy a game hitherto only available in pubs.

It is a rather bitter irony, then, that so many of these premises have since been converted to the selling of alcohol. The Battersea billiard hall is no exception: it's now a bar. 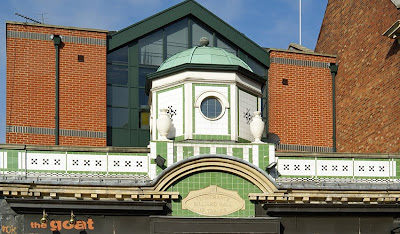 Excellent. Many years ago I used to walk past this building, but I'd quite forgotten about it. The writer P J Kavanagh also used to walk past such a place, and wrote a rather moving poem, called 'The Temperance Billiards Rooms', about it.

Thank you - I'll look for that poem.

I think the rise of temperance facilities is a great story. Here in Australia we had fabulous coffee palaces, enormous and impressive buildings to make family outings peaceful and booze-free. But temperance billiard rooms would be something novel.. and sensible :)

Thanks for the link
Hels
http://melbourneblogger.blogspot.com/2009/02/coffee-palaces-temperance-and-melbourne.html

Yes it's pretty ironic isn't it! It's in Battersea though, not Clapham. Apparently Clapham was considered classier than Battersea when the railway was built, hence the mainline station was named 'Clapham Junction' which has led to much confusion ever since.

Thank you, John, I'll correct that. It certainly confused me!