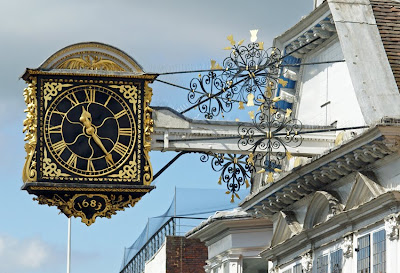 When John Aylward, a London clockmaker, wanted to expand his business he turned his attention to Guildford, Surrey. However, he first had to persuade the town to allow him to trade there - and by happy coincidence, the Guildhall had been refurbished that very year, 1683. Aylward therefore presented a clock to the Corporation; to this day, it projects from the building facade. (It did take a brief holiday during World War II, when it was hidden at a secret location.)

The clock's workings are actually inside the building; it is wound three times a week. For a brief time, it was illuminated: the Victorians replaced the clock faces with glass dials so that they could be lit up by gaslight. However, these didn't last long and are now in storage while the original faces have returned to their rightful position.

If the clock was indeed a bribe (and records show a John Aylward being given freedom of the town the very next year), then Guildford made a good bargain.