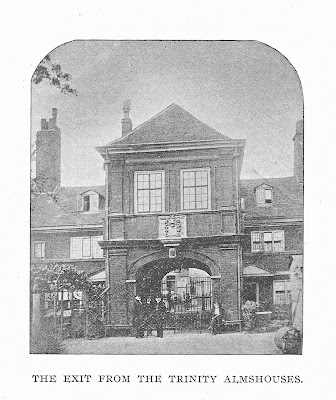 Since Trinity House had its roots in Deptford, it's natural that it had almshouses there too. They were built in 1670 on land given by Sir Richard Browne, Master of the Corporation, and stood near St Nicholas' Church at the north end of Church Street.
The body responsible for licensing Thames pilots (and later, for looking after after Britain's lighthouses), Trinity House was also a guild whose services to members included providing housing for the needy. These 56 residences were specifically for 'decayed masters and commanders of ships, mates, and pilots, and their wives or widows'.

The Deptford almshouses were demolished in 1877. These photographs, taken by Thankfull Sturdee, provide a record of what was lost. 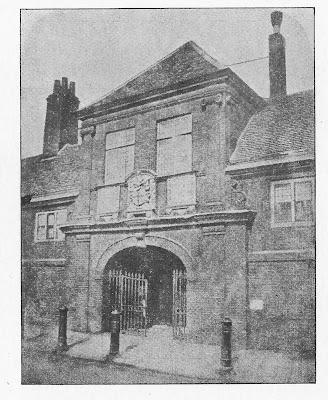 Unbelievbable timing! We were talking about Sayes Court and St Nicholas's parish workhouse in class on Friday.

So I have just one question. Who were the almshouses developed for - old and frail guildworkers who were retired? or the unemployed and the poor of the parish? If the answer is retired guildworkers, where did the old workhouse residents go?

Caoline, are thes ethe almshouses along stowage or those that were behind St. Paul's?

Shipwright's Palace, these are the ones on Church Street - your maps clearly show them as behind St Paul's, although for some reason I thought they were a bit further north. (Wonderful images, by the way.)

Hels, these were for retired guild members; the workhouse was separate, and the elderly stayed in it until they died.