From the archives: pat-a-cake...

While we're all looking at the ground to avoid ice and slush, here's a reminder of the unexpected pleasures to be found by looking up.

After the war, Lindsey Clark sculpted a number of war memorials including the one in Borough High Street. Other major commissions included several figures (St George, Christ and crib figures) in Westminster Cathedral. A friend of Eric Gill, Lindsey Clark is perhaps best known for his memorial and ecclesiastical work. However, the bakery reliefs were not his only work for commercial premises: for example, he also produced reliefs of two figures for the Gas Showrooms in Sheffield.

This narrow street, then, is lucky enough to have not only one of the more unusual decorative features in the City but also an example of the work of an important twentieth-century sculptor. Well worth pausing and looking up for! 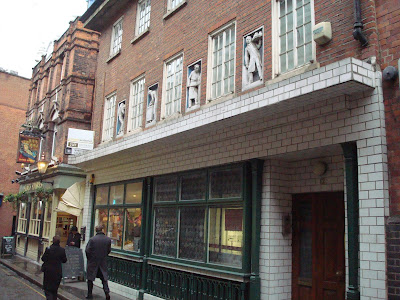 Thanks for introducing me to Philip Lindsey Clark. I've added him to Londoners of Note on our web site.