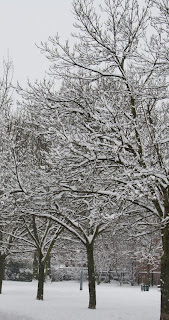 As we're finding out thanks to the railway chaos around London, one of the big problems with snow is the ice that comes with it. The combination proved particularly dangerous in 1809, when the consequence was a flood. This newspaper report of 29 January paints a dramatic picture of its impact upon Deptford:

EFFECTS OF THE THAW. – The sudden thaw which took place on Tuesday has occasioned great damage in the vicinity of the metropolis, by the immense torrents flooding and overwhelming the low lands. ... The Ravensborn river, at Lewisham, early on Wednesday morning, overflowed its banks, inundating all the fields between that place and Deptford. Form the waterworks at the top of Mill-lane (in the broad way, which leads to the Ravensborn), to the Tide-mills in Church-street, Deptford (where it found vent in Deptford creek), it rushed in torrents, in many parts up to the chamber window; chairs, tables, and furniture of various descriptions, were washed away, and carried through the creek into the Thames. The body of a man was also observed, carried forward with the torrent. It likewise rushed from the fields on the right of Deptford bridge, and, about nine on Wednesday morning, became higher than the arch of the bridge, in consequence of which it broke down the parapet, and about four yards of the bridge gave way. The road was impassable for several hours. ... [Jan 29, 1809]

The thaw had happened quickly, prompted by heavy rain. However, what made things much worse was a thin layer of ice under the snow: it prevented the water soaking into the ground, and flooding of the Thames and its tributaries was the result.