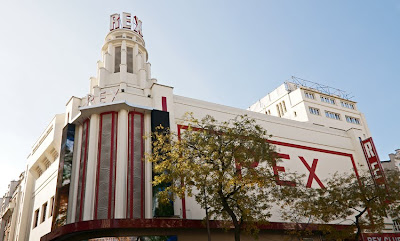 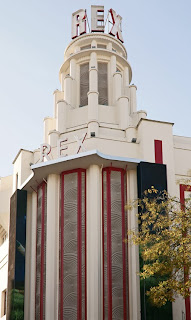 Here's a nice piece of Art Deco in Paris: the Grand Rex cinema. It's one of Europe's largest, and in this multiplex era retains its 3,300-seater auditorium - although more comfortable seating has now reduced capacity to 2,650. (There are smaller rooms, but they're consigned to the basement.)

The Rex opened on 8 December 1932. The evening featured an orchestra, organ and dancers; among all the glamour and wonder, it's unlikely that the audience would have guessed that there had been a slight scaling back of the plans. Cinema owner Jacques Haik had originally planned an auditorium seating 5,000!

Another innovation appeared in 1957: one of France's first escalators, inaugurated by film star Gary Cooper.