A Souvenir of London (1)

In my youth, the favourite pictorial souvenir was a set of postcard views, which less than conveniently unfolded into a single long strip. However, I found a more elegant version from the more distant past: a souvenir album with photographic scenes pasted in. It's undated, but the vehicles in its scenes suggest it may be Edwardian.

I'll be sharing a selection of the views, beginning today with London Bridge. It is of course the 'new' London Bridge opened in 1831. When the current bridge replaced it in 1973, this one moved across the Atlantic to Lake Havasu City, Arizona. 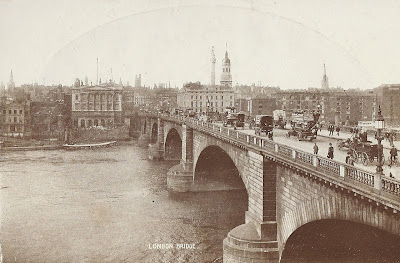 This scene not only showcases the bridge, but also has a nice mixture of horse-drawn and motorised transport. You can just make out the pedestrians in their rather fine hats, too! (As usual, click the image to enlarge.)

Good find. It's beautiful how the spires still dominate the city.

Nod, I think it is Edwardian also.

It shows that private transport, especially petrol-based, was never ideal for the inside of a large city. Perhaps we can't have horse drawn trams now, but we certainly can have bikes and electric trams.

Looking forward to your other postcards :)