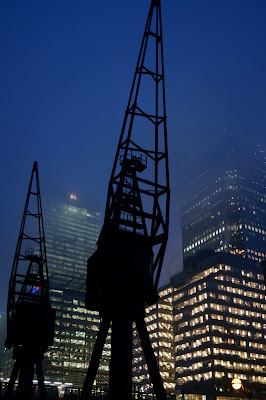 Today I visited the Museum of Docklands' exhibition on the Sidney Street Siege. Coming out, both night and fog were falling over the skyscrapers. There may have been no comparison to London's historic pea-soupers, but it was atmospheric all the same.

As for the exhibition, aside from a few quibbles (the order was a little odd, with the story beginning at the opposite end of the room to the entrance) it is rather good. Particularly fascinating are the exhibits, which include police evidence envelopes containing bullets; a hat and ammunition belt found in the house; and several guns used by the revolutionaries. There's also contemporary newsreel with scenes of Winston Churcill chatting with the police - a few cases away, his overcoat is on show. The Museum is still hoping to track down the top hat he also wore, possibly with bullet-hole.

The exhibition runs until April and admission is free. For added atmosphere, go on a foggy day... 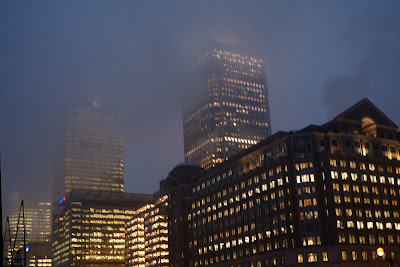