From the archives: Butt Lane to Deptford High Street

Deptford High Street has a rich past, so there should be plenty to fill a forthcoming documentary featuring it as one of London's 'Secret Streets'. The programme researchers are looking for local people's information and reminiscences. More details are on the Deptford Dame and Crosswhatfields blogs, which have had the excellent idea of collecting those stories so we can share them even if they're not included in the documentary itself.
Here, though, is a look back to a key moment in the street's history: 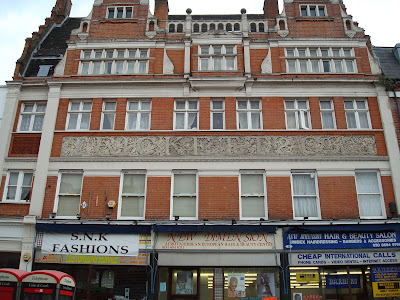 Today, the High Street remains the centre of Deptford's shopping. Two highlights: first, a few years ago, Yellow Pages named it London's best, on the basis of a formula to calculate diversity. (Its only chain stores are Peacock's and Iceland).* Second, the market on Wednesdays, Fridays and especially Saturdays is brilliant for all sorts of bargains - and don't miss the secondhand section on Douglas Way.
Related posts: Deptford Station, R Trickett's store.

*Since this was written, Tesco Metro have also moved in. As have many, many betting shops...

Hi Caroline, many thanks to you and Deptford's bloggers for adding this info about our series. I'm very much enjoying reading your blogs and researching Deptford. Best wishes, Jaime Taylor, Our Secret Streets

My pleasure, I'm really looking forward to the series!