One tactic of the Indian National Congress, in seeking independence for India, was to put forward candidates in English elections. In Deptford, barrister Lal Mohun Ghose became the first Asian candidate to stand for Parliament when he twice stood as the Liberal candidate against the Conservative William Evelyn. He was defeated both times: in 1885 he lost by only 367 votes (receiving 3,560 to Evelyn's 3,927). Given such a narrow defeat, the New York Times highlighted the Deptford contest as one of the most interesting of the 1886 election.

The Pall Mall Gazette described the solid support Ghose received from the Liberal Party and from local people in 1886. Gladstone 'placed a carriage at the disposal of Mr. Ghose, and which was on the scene doing good. The good example ... has been followed by many other Liberal supporters, and Mr. Ghose [was] well supplied with vehicles.' Volunteers canvassed, brought voters to the polls, and displayed posters in shops and houses. However, while the Gazette thought Ghose had the majority of posters overall, publicans generally preferred Evelyn who also had more carriages at his disposal. In contrast, a local bootmaker had a poster stating 'Good business. Vote for Ghose for Deptford. Wear Whyman's boots and get a seat in Parliament.' The effect upon sales of Ghose's defeat is not recorded!

Ghose's candidacy was followed with interest in India. The Gazette mentions receiving a telegram from the Indian Spectator: 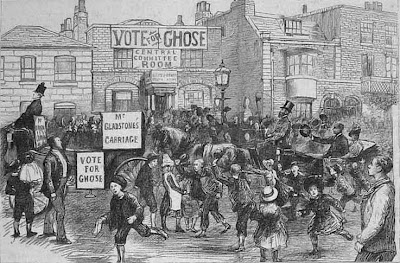 Despite these efforts, Ghose was again defeated by Evelyn. Naoroji would go on to represent the constituency of Finsbury Central in 1892-5 (and was thus Britain's first Asian MP), and had already been president of the Indian National Congress. He is therefore better known today than Ghose, but both arguably made an important contribution to raising awareness of Indian nationalism in London. Indeed, given that Irish home rule was a central issue of the 1886 election, Ghose and Naoroji ensured that the issue of imperialism was considered more widely - and the electoral support they received helps paint a more nuanced picture of English attitudes towards the Empire.

Very interesting Caroline, never heard of this before. With the strong Irish National League presence in the area at that time too Deptford was obviously a bit of an anti-colonial hotbed.

Fascinating to read this detail and also see that sketch. How far-sighted of the INC. I picked up on this last year when the Lewisham Local History Society held a lecture about Ghose (http://www.lewishamhistory.org.uk/index.php)

I don't suppose Ghose and (a very young) Gandhi crossed paths - the latter was studying law in London around that time.
(http://londonmasalaandchips.blogspot.com/2010/09/following-in-gandhis-london-footsteps.html)

Thank you both - it does throw a fascinating light on local politics; it's a shame that Ghose seems to be largely forgotten now.

Raven, I was really cross to miss that lecture (I had to work)! I'd only found out about Ghose a few weeks before, when I came across a newspaper report.