Or rather, by bus to Wimbledon - and not a womble to be seen! However, I did spot three ghost signs on the Broadway so I'm not really complaining. First was a rather high sign - so high, in fact, that it's difficult to decipher or photograph. Somebody's boots are being advertised, but I wasn't able to work out whose. 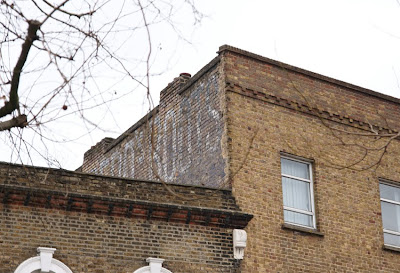 Almost next door was a more visible, but also more faded, shopfront. The only clear words are 'furnishers', on sixty-something Broadway, whose products could be bought on hire purchase 'from 2/- weekly'. However, Lucy of Ghost Signs from Bygone Times has done some detective work and discovered that the building was home to the National Furnishing Company, 'complete house furnishers' from the late nineteenth century until 1902, when the building became a dairy and the facade was painted over. 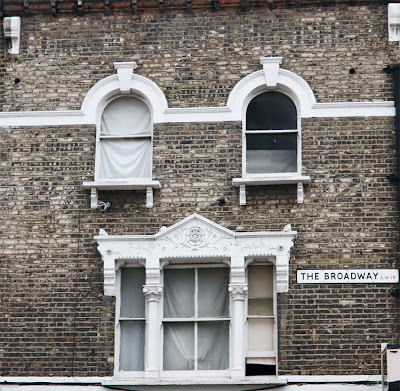 Last, and best, was this sign for the Trueform Boot Co. (Footwear must have been a big seller in Wimbledon past.) Ladies, gents and children were all catered for - and for some time, as this sign has been repainted at least once. The red lettering of the first sign is still faintly visible. 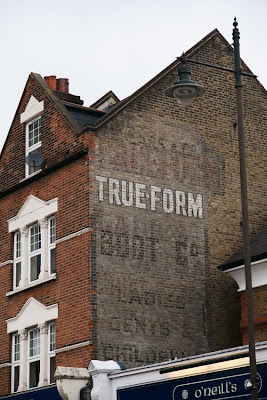 Hi Caroline,
The boots advertised on the first ghost sign were Gibberd's.
All the best,
Sébastien

Thank you, Sebastien - it's lovely to have that mystery solved!

Hi Caroline, the 2nd photo is for "COMPLETE HOUSE FURNISHERS. 55 BROADWAY". I found an ad from 1900 which confirms this although the only photos of the building are from when it was a dairy downstairs & a dentists upstairs. The ad & photos are on my community Facebook page: https://www.facebook.com/GhostSignsFromBygoneTimes/photos/pcb.1283407785031429/1283405295031678/?type=3&theater (click on arrow next to ad to see the collage of old photos of the building).

Thank you Lucy, that's wonderful to know - and I love your page!

Now updated with that information and some links to your page. Thank you again!

You're welcome Caroline. Love your blog too, it's fascinating! :-)