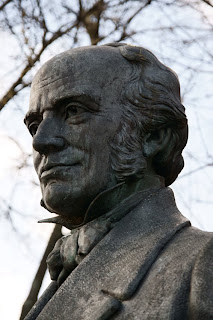 This bust stands alongside Greenland Dock, Rotherhithe, and it could hardly be more appropriately placed. Although James Walker was born in Falkirk in 1781 and studied in Glasgow, his working life as a civil engineer was spent in London's docklands. Initially employed by his uncle who constructed the East India and West India docks, Walker was engineer of the Surrey Commercial Docks from 1810 until his death in 1862. (He also worked on a number of projects including canals, the old Vauxhall Bridge and, as chief engineer of Trinity House, lighthouses.)
While some of the docks have been drained dry and filled, Greenland Dock is among the survivors. Originally Howland Great Wet Dock, used primarily for refitting ships, its role evolved in the eighteenth century. The increasing number of Greenland whalers using the dock brought it a new name and a new landscape: blubber boiling houses were built alongside to convert whale fat into a desirable oil. 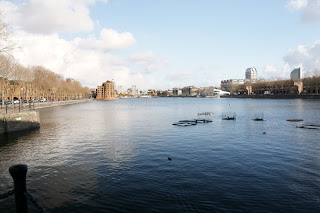 There was further change in the nineteenth century, as Surrey Commercial Docks became the centre of Britain's wood imports. Like its neighbours, the Greenland Dock received cargoes of softwood (deal) from the Baltic; the buildings surrounding it were now - surely more fragrant - deal warehouses. This was the period when Walker was the docks' engineer, rebuilding Greenland Dock and the lock at its entrance in 1851-2, but he probably wouldn't recognise it today. It underwent a major expansion project after his death, extending to double its previous length and depth at the turn of the century so that it could take large cargo ships and ocean liners. Today the dock is used for leisure purposes, although reminders of its past are scattered around. Among these is our bust, mounted on a post a little back from the water's edge.
Click here for all the 'random statue' posts.
- February 24, 2011

Hi Caroline. I'm still enjoying your blog via Google Reader - keep up the good work! I live a stone's throw away from this statue, on the other side of the Moby Dick pub and can just see it from my spare room window. Years ago it acquired a tilt like the Tower of Pisa and was like that for a couple of years before it dawned on someone that it was a bit of an offense to the splendid engineer to have him falling over one degree at a time! I've got a picture of it in full lean-mode somewhere.

It was created, by the way, by Michael Rizzello OBE, who also did the sculpture of the docks as they were in 1896, at the top of Stave Hill in the ecological park, a short walk from Greenland Dock. If anyone's interested there is information about him on his 2004 The Guardian obituary:
http://www.independent.co.uk/news/obituaries/michael-rizzello-542963.html.

Thank you, Andie! I didn't know that the statue had developed a lean, what a great story! Thank you also for the information about the sculptor.

It would have been even better if I had said that the obituary was on The Independent rather than The Guardian but never mind! My brain had obviously developed a bit of a lean itself yesterday :-)