A climb up Mont Garrot above Saint Suliac, officially one of France's most beautiful villages, offers lovely views of the Rance estuary. I was peering through the trees for one particular feature, though: the remains of a Viking camp. 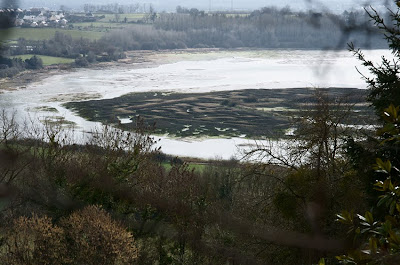 The Vikings settled at this point in the first half of the tenth century because it gave them control of the river. Up to eighteen longboats could be moored at the fortified encampment. After about fifty years, though, the Vikings left Brittany and moved to Normandy - just over a century later, their Norman descendants would be invading England.

The camp's stone foundations are now visible at low tide. They aren't pristine: in the nineteenth century, damage was done by a local man who wanted to turn the site into an oyster park. (Its history wasn't understood at the time.) However, they are pretty extraordinary: another remarkable survival on the Breton coast.