From the archives: London Stone

Two years after I wrote about the London Stone, it is still imprisoned in its Cannon Street cage. Surely it deserves better treatment than this!
Imprisoned in a metal cage, London Stone is almost invisible to passers-by. It's in a neglected-looking building opposite Cannon Street Station, the former premises of the Overseas Chinese Banking Corporation. When the bank was converted to a sports shop, the stone was nearly destroyed by a builder until the manager intervened. What a sorry situation for one of London's oldest mysteries. 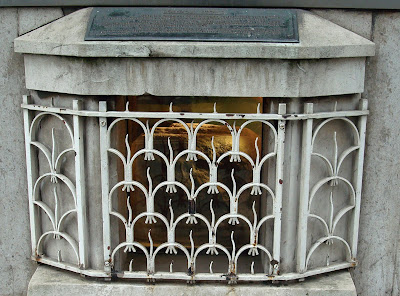 It may be neglected today, but the legend and sense of the Stone's importance does persist. Let's hope that in future, it gets the setting it deserves.
- March 13, 2011

I'm surprised that no crackpot religious organization has laid claim to it and demanded access to it for their ceremonies. They seem to have hijacked everything else.

I think the best thing would be to place the London Stone in the British Museum. After all, it has been moved so many times that no particular location can now be claimed as the place where it "ought" to be sited. In the Museum it would be both visible and protected.

Left to its own devices, it's likely to go on shrinking until it finally disappears...

Yes, having it left to the mercies of whoever happens to occupy that building seems crazy. There was talk of temporary relocation to the Museum of London, which would also work well, or to the refurbished Cannon Street station.

I also had a bit of a moan about this recently, here:

I'm sure a better and more accessible home can be found quite inexpensively. I'm guessing that nobody has responsibility for it, so nobody owns the problem.

Thank you for this post. I remember seeing this stone on a tv program many moons ago, and could never remember enough about it to look for it again. I will now go and have a look at it.