Nehemiah Wallington and the Witchfinder General 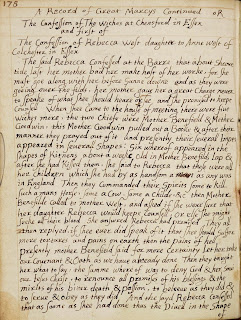 The marvellously-named Nehemiah Wallington wasn't a great historical figure himself. On the contrary, he was a wood turner. However, he did keep a diary - and he was also witness to some of the most interesting and disturbing events of the seventeenth century.
Wallington followed the activities of Matthew Hopkins, Witchfinder General, in Manningtree. In 1645, Hopkins unearthed a supposed coven of local witches and obtained confessions under torture. Nineteen women were hanged as a result; another four died in prison. These events are recorded in Wallington's diary.
The diaries are also witness to Wallington's own religious anxieties. He was a Puritan, but suffered doubts about his salvation (to the point that he once attempted suicide). These journals were intended as a record of his sins and God's mercies: the volume containing the witch trials is entitled 'Great marcys [mercies] continued, or yet God is good to Israel'. This recording of both personal and public is what makes diaries such a rich historical source.
Mannington's diary is now at Tatton Hall Mansion - but no journey is required to see the volume describing the witch trials. John Rylands Library, funded by JISC, have digitised it: this account of the Witchfinder General's activities, in a contemporary's own words and handwriting, can now be read here.
- March 10, 2011

What a perfect document to find! Last week my students were asked to find a witch trial in the Enlightenment Era, one that would raise all the key issues of examinations of the body for teats, familiars, spectral evidence, torture, pamphlets etc etc.

In the end we discussed a case in Herts from 1712, but contemporary and unbiased documentation would have been invaluable.