Whales in the Thames are not unknown, but they're certainly unusual. When one swam up the river a few years ago, the media followed its every move. The public was equally fascinated in 1842 - but the poor animal had met with a very different reception. While efforts were made to save its modern counterpart, the Victorian stray was killed and immediately put on public display.
On Sunday 23 October, a young whale made its way to Deptford Pier. There, it was spotted by watermen who immediately set off in armed pursuit. The Illustrated London News describes what followed:

Five of them put off in their boat, and one of them, armed with a large bearded spear, commenced the attack upon the monster, which soon showed symptoms of weakness, and threw up large quantities of water from the aperture on its back. The other boats surrounded the animal and pushed it along with their boat-hooks close under the pier, where they finally despatched him, and with strong cords and pullies raised him, with much difficulty, upon the pier. In a short time afterwards such immense numbers of persons congregated to gratify their curiosity, that Mr John Taylor, the high constable of Deptford, was compelled to call for the aid of the R division of the police to keep order. 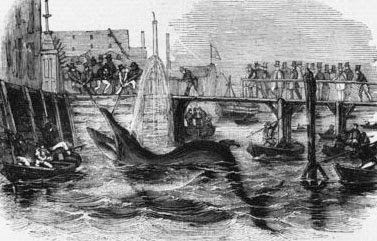 The gory spectacle over, the whale was moved to the Bull and Butcher pub in Old King Street and put on display. No time was lost in circulating publicity material:

On the Premises of Mr. Williams,

WHICH WAS KILLED OFF DEPTFORD PIER,

By a Number of Watermen.

The above measures in length above 20 Feet; in circumference 10 Feet, and weighs above 2 Tons.

May be viewed daily, from 9 o’Clock in the morning till 10 o’Clock at Night.

The Illustrated London News account identifies it as a finback whale, 14 feet 6 inches long (it seems to have grown in the flyer quoted above). It also suggested how the whale came to be in such an unlikely location: 'He is supposed to have gone blind in the river while in pursuit of herrings.'
In 1891, a writer to the Kentish Notebook suggested that after being displayed in Deptford, the whale went on to be shown at the Half Moon Inn in Borough. Finally, it was dissected and its skeleton given to the British Museum.
Perhaps even more strangely, this was not the first Deptford whale. John Evelyn described one meeting an equally brutal end there in June 1658:

A large whale was taken betwixt my land butting on the Thames and Greenwich, which drew an infinite concourse to see it, by water, coach, and on foote, from London and all parts. It appeared first below Greenwich at low water, for at high water it would have destroyed all the boats; but lying now in shallow water, incompassed with boats, after a long conflict it was killed with a harping yron, struck in the head, out of which it spouted blood and water by two tunnells, and after a horrid grone it ran quite on shore and died. Its length was fifty-eight foote, height sixteen, black skin'd like coach-leather, very small eyes, greate taile, and onely two small finns, a picked snout, and a mouth so wide that divers men might have stood upright in it; no teeth, but suck'd the slime onely as thro' a grate of that bone which we call whale-bone; the throate yet so narrow as would not have admitted the least of fishes. The extremes of the cetaceous bones hang downwards from the upper jaw; and was hairy towards the ends and bottom within-side; all of it prodigious; but in nothing more wonderful than that an animal of so greate a bulk should be nourished onely by slime through those grates.

Hello:
We do recall the plight of the whale in the Thames a few years back. Although, as you say, its treatment was very different from that of the whale in Victorian times, we are rather afraid that it did not survive its ordeal.

Yes, unfortunately it did die - but at least of natural causes. Of course, the Victorian whale had made the mistake of travelling to a major whaling port.

I'm not completely convinced that we treat whales in the Thames with any less cruelty today. In Victorian times, they were instantly killed. The whale that came up the river a few years back was surrounded by boats and harassed for several days before it died. The difference? Not sure....

This is so very interesting. In Toronto Barnum and Bailey ( I think) were taking around a live whales as part of his traveling circus. One died and they buried it in the mud off Toronto Harbour. Since then the land built up with fill and 100 years later, construction workers were very puzzled to find a whale skeleton in our fresh-water lake. Hi Lance and Jane!

Chris, sadly I think you're right about the actual experience, but at least the intentions were good. (Although the road to hell is famously paved with good intentions!)