From the archives: the devil's rock

It's been a little while since I've posted about Brittany, so with the spring weather back this seems a good time to return to one of my favourite walks there. 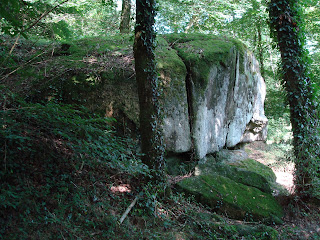 I'll soon be visiting Brittany, where every stone seems to have a name and a story. La Roche au Géant in the village of Lanrelas is no exception. Indeed, rising suddenly as it does to more than a person's height above the path, it seems to demand some kind of myth. Its name means 'the giant's rock', although there is also an alternative: the devil's rock. The latter is explained by a local legend, according to which the stone was used for many years by the devil as a gateway from hell. Each dark and moonless night, he would wander the parish seizing the souls of its unhappy or dishonest residents. However, there came a night when the devil could find only one soul: that of a grief-stricken priest. He brought him up to the rock, where he cut off his arms, legs and head. The spots where they rested before being devoured can still be seen (with some imagination) on the top of the rock. 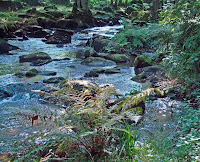 The alternative legends are barely more cheerful, tending to involve the use of the rock by a giant for human sacrifice. However, today the site is far from menacing: the stones are covered with moss and surrounded by trees, with the river Rance (little more than a stream as yet) dancing below. Paths lead along the riverside, around the rock and to a menhir in the field above; there is even a picnic area, with no sightings of devils or giants reported!

Grim and grisly, aren't they (comparable to those in former home - ie Wales)?

PS Love the new template & layout (pleased to see the PP series still has its own slot).
Word verif says 'mingr' which, frankly, is a bit much ... ;-)!

Thank you, I'm glad you like it! I'm really glad you're blogging (and sleeping!) again, too.