The advice to Londoners to look up is rarely more apt than here on Regent Street. Above the plate glass and shiny modern gadgets are some wonderful Victorian details. 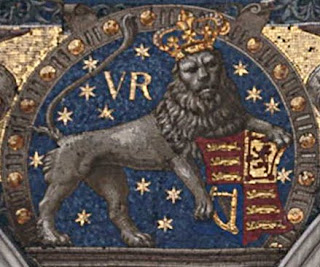 These fabulous mosaics date from 1898, although they were restored in 1999. They made a fitting advertisement for the original occupants, the Italian glass- and mosaic-makers Salviati. Among their other London projects were two Victorian icons, the Albert Memorial and Westminster Cathedral.
Very aptly, the mosaics have London and Venetian themes. Between coats of arms are lions - one is the British lion, the other the lion of the St Mark. The cities named across the top are, as you'd expect, those where Salviati had shops.
The firm's founder, Antonio Salviati, was actually a lawyer rather than a glassmaker by training. However, he opened his first glass company in 1859; his later Compagnia Venezia Murano is still trading today, as Pauly & C.
- May 11, 2011