As our libraries become more scarce and threatened, it's hard not to contrast this decline in provision with the appearance of numerous, often elaborate buildings in the Victorian period. West Norwood has a lovely example, with 'Free Public Library' across its facade. It is the work of architect Sidney Smith, who may be better known for Tate Britain but also built other Lambeth libraries. That's no coincidence: both libraries and gallery were commissioned by Sir Henry Tate. 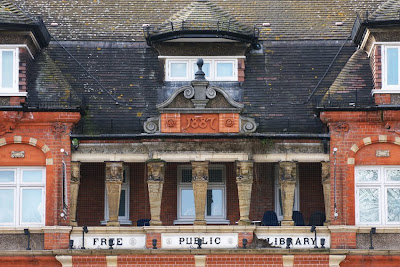 Like his Scottish-American counterpart Andrew Carnegie, who also gave library buildings to the capital, Tate was a self-made millionaire. Starting as a grocer's apprentice, he went on to have his own shops before moving into sugar refining. His fortune allowed him to support a number of causes including educational establishments and hospitals, as well as to found libraries and the eponymous gallery. There was good reason for Tate to establish his libraries in South London: he lived in Streatham and is buried in West Norwood Cemetery.
One factor which helped Tate and other philanthropists was that the Libraries Act 1850 allowed local councils to finance public reading rooms. However, important restrictions on this power -particularly a cap on the amount councils could spend - made the involvement of benefactors invaluable. (The Act had been controversial, and at least one opponent had argued that more knowledge just made the working classes harder to manage.) Free libraries made books available to those who could afford neither to buy them nor to pay the borrowing fees at commercial lending libraries. They also provided a place to read them, ideally one more quiet and spacious than the overcrowded homes of many ordinary people.
The West Norwood building ceased to be a library in 1964 (replaced by a more modern, but less attractive, one nearby). However, it is protected by Grade II listing and after a period of disuse is now a council venue and activity centre.
- May 20, 2011

This opponent to the Library Act 1850 was right, which is exactly why there should be free libraries and education for all, at all ages. Panem et circences (nowadays football, soaps and reality tv) works. Keep the masses fed, entertained, and one should add uneducated, and the ruling class has a much easier ride. All this reminds me of a sentence by Cuban poet José Martí "I don't ask you to believe, I ask you to read."

As someone who worked in the public library service for part of my career, I am of course interested in libraries, whether ancient or modern.

Like so many institutions that came into being a while ago, we tend to forget how important libraries are and what a different world it was (and I fear, will be) without them.

Times change and so do perceived needs. Where once the reader was issued with cardboard tickets to be matched with cards from the borrowed books, we today have machines that issue and return books automatically without the intervention of a library assistant. Libraries' roles are changing as well but they are too often changed to suit the penny-pinching proclivities of councils rather than to meet genuine demand.

There may be perfectly valid reasons for moving a library from a beautiful old building into an efficient purpose-built modern one. In that case, let us do our best to find a new, noble use for the old building so that it may survive as a monument to its illustrious past and as a reminder to us of all we owe to the service.

I greatly fear that we may not know what we are losing until we have finally thrown it away. Generally speaking, councils regard libraries as a burden and a nuisance and are using the economic downturn as an excuse to shrink and even kill off libraries. If we allow this to happen, we will be all the poorer for it.