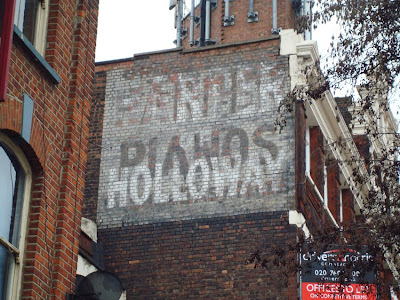 The Harper Piano Co of Holloway Road were active in the first half of the twentieth century, manufacturing a range of instruments including gramophones and 'synchronising pianos for cinema theatres'. The company later changed its name to the Harper Electric Piano Co, not because it was making an Edwardian electronic keyboard but because it made instruments which could only be played after putting a penny in the slot. In the year to November 1905 they sold 55 of these, mainly to cafes and restaurants.
Although the company is long gone from Holloway Road, the sign still stands out. It appears to have been overpainted at least once.
Image (left): 1922 British Industries Fair advert, via Grace's Guide wiki.
- May 14, 2011

very good, but how dare you come within spitting distance of my home and not come round for a cuppa!!!!

Also, I meant to say, that if you wander down to the other end of Jacksons Road (which is where you must have been standing when you took this shot) to the junction where it meets Lowman Road at the Hornsey Road end, there is another faded Harpers piano sign: http://www.flickr.com/photos/janepbr/2915226256/

I was between a meeting and an exam invigilation, so I really wasn't fit for human company! Thanks for the link, I'll take a look next time I'm around there.

It's good to be able to find out about the originators of ghost signs as you have done here because they often remain obscure, all memory of them washed away by the tide of history.

I often wonder why it is that these old signs remain even when those painted over them become obliterated. Was the quality of paint or the workmanship of painters better in those days? Or have they been protected until now by the over-painting?

I am always intrigued by those ghost signs that state prices of goods or services. In our day, inflation causes prices to rise so fast that no one would dare to paint their prices over the shop, knowing that they are likely to increase within a short time.

Silvertiger, Somewhere I have a photo taken many years ago of a shop front in Halifax that had the prices charged in stained glass in the upper part of the shop window. Judging by the style it looked to be from the 1930s.

Caroline I enjoy your posts very much, I am impressed with the frequency you update your blog.

Thank you, Stephen. I'm also intrigued by the permanent forms such pricing could take. There's a ghost sign in Lewisham which includes the weekly credit payments for new furniture, but at least those adverts were expected to need repainting every few years or so. Stained glass seems awfully long-term.

I wonder too about how some of these signs survive. I think overpainting does sometimes protect them, and perhaps the stronger colours also help them stand out. Of course, the best protection for them is often the advertising hoarding which now obscures so many!