I had intended to remind you that across much of Europe, the Museums at Night event was happening last Friday and Saturday. However, Blogger had other ideas and I couldn't actually post anything until Saturday afternoon! By then, I'd already attended a Museums at Night event: a quiz on Lost London, hosted by Londonist at the Hunterian Museum. (I am, naturally, far too modest to mention that I was on the winning team, along with fellow bloggers responsible for Tired of London, Jane's London, London Ramblings and IanVisits.)

The lost London theme tied in to their current exhibition, Lost London Museums. The Hunterian itself, although very much here and thriving, suffered serious bomb damage during the Second World War. As the museum of the Royal College of Surgeons, it holds an eclectic mix of items including skeletons, specimens in bottles and surgical instruments; among the exhibits lost was the skeleton of the tragic Chunee the elephant, former star of the Exeter Exchange Royal Menagerie. 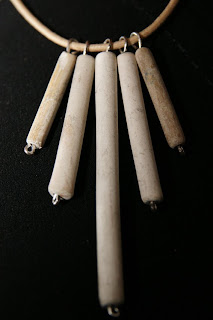 Lost London also took material form that evening with a necklace made from clay pipe. These fragments are a bit of social history which really has disappeared: for centuries before the invention of the cigarette, the most usual way to smoke tobacco was in cheap, unglazed pipes. They were each used a few times and discarded. The pipes are no longer in use, but many were thrown into the Thames to be washed up centuries later on its foreshore. I've collected a few pieces which just sit on a shelf, but Jane makes them into unique jewellery.

Finally, for another view of Lost London, enjoy films on the theme this Thursday at the John Harvard Library, SE1. The free event begins at 5pm and is presented jointly by the BFI and East Street Library Local History Group.

What a clever idea. The remains of collections that were forgotten, dispersed or destroyed are now precious relics in the Hunterian Museum. I would love to see it.

I know how heartbreaking it is, trying to resurrect beautiful architecture that was destroyed by local governments and developers throughout the 20th century. In June I have scheduled a post covering the sad history of two important London buildings.

I look forward to reading it, and am intrigued as to which two!