All aboard for the necropolis! 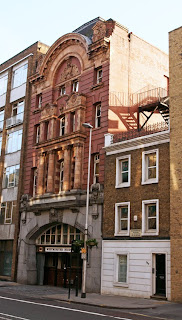 The building on Westminster Bridge Road is now so unassuming at street level, you wouldn't even guess that it used to be a railway station. But that's exactly what it was - and for one of Britain's most unusual railways.
The burial of the dead has long been an issue for London. The eighteenth century saw resurrectionists digging up bodies to sell for surgical dissections; in the nineteenth century, the city's graveyards simply ran out of room. Since people didn't stop dying, highly unsavoury conditions resulted until the opening of the 'magnificent seven': a ring of cemeteries including Highgate, West Norwood and Nunhead, created in the 1830s and 1840s.
By the 1850s, there was another alternative: the expansion of the railways meant that the Home Counties were easily accessible by train. Why not bury the city's dead in the more spacious surroundings of Surrey? Brookwood Cemetery was opened in 1854, complete with its own railway and station to transport coffin and mourners from London. Since it shared much of its route with trains running from Waterloo, the London terminus had to be positioned nearby. 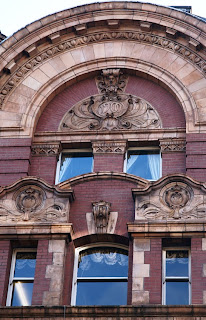 The station moved from its original site near Leake Street in 1902, when Waterloo Station expanded, and found a new location on Westminster Bridge Road. (Work had begun in 1900: hence the date on the facade.) The building was deliberately made fashionable and attractive to highlight Brookwood as a modern alternative to traditionally gloomy funeral providers. The archway was the entrance to the station behind, while the rooms above were offices. Originally the driveway was lined with palm and bay trees; lifts led up to the platform, where five waiting rooms allowed different funeral parties to keep apart.
All that was for first-class passengers, though: death may be the great leveller, but the Necropolis Railway kept social distinctions intact. These passengers would be attending a first or second-class funeral, the former offering more choice of grave location and the erection of a permanent memorial. If the mourners didn't want to travel out to Surrey, they could even have the funeral service in the station's chapelle ardente. If some of the mourners who did make the journey were not familiar faces to the rest of the party, that is probably because they were golfers taking advantage of the Necropolis Railway's lower fares to travel to the nearby West Hill golf course!
Third-class passengers used a side entrance, took stairs rather than lifts to their platform and shared a communal waiting room. These third-class funerals were for paupers; Brookwood not only gave them individual graves but also allowed funerals on Sunday when their family and friends could attend without missing work.
Not only the mourners but also the coffins enjoyed separate accommodation according to class. They were also divided into Church of England and other, so that your upper-class, Conformist loved one would not make their final journey in the company of a non-Conformist or member of the lower orders.
Trains would run from here until 1941, when part of the building as well as the tracks themselves were damaged in an air raid. The remaining station building became offices.
- June 24, 2011

Fascinating, in a creepy kind of way. It is difficult to understand the Victorian way of death.

It is intriguing: the Victorians seem to have genuinely enjoyed all the trappings of mourning.

Fascinating to see the actual building as I've only recently finished Andrew Martin's detective story, "The Necropolis Railway" - 'a novel of murder, mystery and steam' - which is centred around this building and the railway. Victorian buildings have such style compared to modern buildings.

Did you enjoy it? I really liked it, but I'm a big fan of Victorian-set detective fiction.

Yes, I did enjoy it - it was nice to be in an era without mobile phones and computers with their instant access to the outside world: the detective has to be far more self reliant.