Renaissance is both the name of the hotel now open at St Pancras Station and an apt description of the rise in its fortunes. When the building first opened here in the 1870s, it was one of London's finest hotels; by the mid-twentieth century, it was facing demolition. Listing saved it but didn't do much for its fortunes: British Rail used it for offices, covering up and painting over many of its finest features, before it lost its fire certificate and closed.
Happily, the story didn't end there. External restoration in the 1990s was followed by internal works which returned St Pancras Chambers to its original role as a fine hotel, as well as converting part of the building into apartments. Reborn, this London landmark is enjoying glory days once more.
There's something about St Pancras which inspires real devotion. It's fitting, then, that the hotel has its own historian - whose involvement in the building began in its darker days. Royden Stock's guided tours are absolutely fascinating: he has a real depth of knowledge, as well as having witnessed the restoration process at first hand. However, before the tour I had time to take a few pictures of the exterior. In part two, we'll move inside. 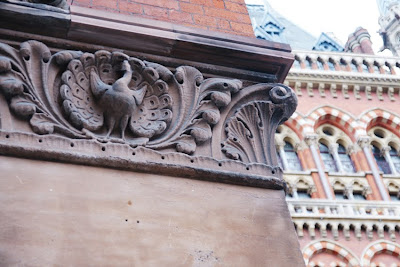 The hotel was commissioned by the Midland Railway, who wanted it to overshadow their rivals next door at King's Cross. George Gilbert Scott, selected as architect, certainly did that - and yet the building we see is the economy version, which cost a mere £438,000. His original plans included another floor, but as the hotel building was exceeding its already huge budget he had to forego that on grounds of cost. 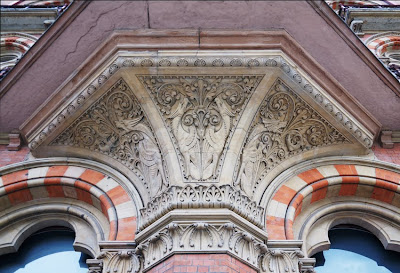 As well as being the finest railway terminus in London, the hotel was also to showcase Midlands materials, not least their red brick. Although a few niches have no statues, again in the interests of saving money, most visitors won't notice that amongst the wealth of other detail here. Even the drainpipes are suitably gothic. 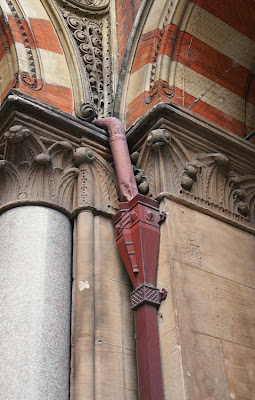 Further reading: Lee Jackson of Victorian London has also visited. The hotel has a PDF of its history here.
- June 28, 2011

Thank goodness. It goes to show that listing works! It kept the place from demolition until the situation changed enough to restore the building properly.

And since St Pancras was the finest railway terminus in London, it would have been doubly tragic to pull a lovely old hotel down.

I probably won't be able to afford to stay there, even for one night. But I can certainly go on the guided tour. And have afternoon tea.

A hotel with its own historian - fantastic! I should really stay longer and look around when coming in from Paris. The new restaurant looks very tempting too!

St Pancras is just down the road from us and we often leave from it or arrive there. It is one of my favourite buildings and I am impressed by the quality of the finish after restoration. It is truly quality work with quality materials. If ever there were a "Cathedral to Travel", this is it. Every time I look at the decor I discover something new.

I have not yet been past the men in black overcoats into the hotel. I hope to manage this sometime soon as I hear such interesting tales of the interior.

Can hotel guests ask room service to send them the historian to tell them a bedtime story, I wonder? :)