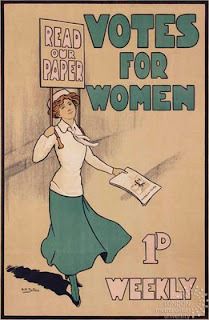 The Women's Library holds fascinating archives which tell the story of the fight for women's suffrage, as recently recognised by UNESCO. Many of those items are now more accessible as they have gone online at VADS. Publicity material produced by suffrage campaigners themselves is complemented by photographs, drawings and items including Emily Wilding Davison's purse. She was holding it when she stepped in front of the King's horse at the 1913 Derby, suffering fatal injuries.

There's also a suffrage teaset, a nice reminder of one lesser-known aspect of the women's suffrage struggle. Not only was a range of merchandise produced, often in the suffrage colours of purple, green and white, but there were even dedicated shops. They combined fundraising, awareness-raising, and useful campaign space; the dedicated suffragist could not only serve tea in appropriate crockery but also play cards, wear clothing and read books on the 'votes for women' theme.