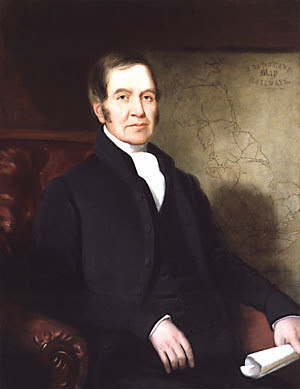 210 years ago today, George Bradshaw was born in Lancashire; he spent most of his life in Manchester. His work would have huge impact on the Victorian railways, but he wasn't an engineer, surveyor or financier. Instead, he provided another essential for passengers: the timetable.
Each company had its own timetable, of course; the problem was, there were about 150 of them in the mid-nineteenth century. Bradshaw's inspired idea was to compile them into a single volume. That made life much easier for the traveller who wanted to plan a journey beyond their local line, so unsurprisingly the books were a great success.
The original title of Bradshaw's Railway Timetables and Assistant to Railway Travelling was just a touch on the long side, so the second year of publication, 1840, saw a change to the much snappier Bradshaw's Railway Companion. Over time, the book became such a feature of British life that it could be referred to simply as Bradshaw's. Even Count Dracula read it before travelling to England!
In the 1920s, the number of railway companies was reduced to four; in 1948, they were nationalised into British Rail. The need for Bradshaw was therefore diminishing, and publication ceased in May 1961. However, for over a century Bradshaw's had been a central part of railway travel.
Image: George Bradshaw, from Wikipedia.
- July 29, 2011

Thanks for reminding me about Bradshaw. I have found an 'old' copy - June 1920. Your tweet was retweeted by @oldmapman as I've been 'looking' at maps for blind people. Thanks for a bit of history.

150 companies, eh? And probably still easier to get the correct fare, times and connections than today! Bradshaw's Tourist Handbook, which inspired Michael Portillo's Railway Journeys on TV recently, is a splendid work in 4 volumes, full of glorious and idiosyncratic descriptions of places he visited, a glimpse into a vanished world. It's virtually impossible to get hold of the actual book, but it can be read online at www.hathitrust.org.

Sorry, the link didn't work - what www.hathitrust.org needs is an http!

Hugh, thank you for the link - I hadn't come across that site before, but will be exploring more than just Bradshaw's Tourist Handbook there!

profwhitestick, your research sounds really interesting. Do maps for blind people have a long history or are they a fairly recent innovation?