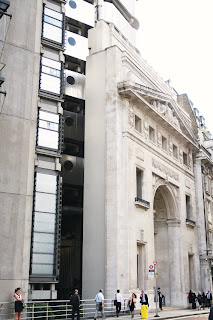 One of the more controversial issues in building conservation is facadism: the situation where a historic facade is preserved, but an entirely new structure is constructed behind. Is this meaningful preservation, or the reduction of history to a thin shell of decoration? The relationship between public front and private interior is gone; the three-dimensional is flattened. Where the new building is larger and taller - as is often the case - then scale and context are also lost. At the same time, beloved streetscapes are being saved even if they are somewhat illusory.
There can be few more blatant, or incongruous, examples than this: the facade of its 1928 predecessor stands like a tiny film set in front of the post-modern bulk of the Lloyds Building.
- July 21, 2011

Although I had never heard the word facadism used before, it is a very familiar problem. On one hand, leaving just a thin slice of historical facade is tragic (for the reasons you outlined). On the other hand, if greedy developers razed every brick of historical buildings to the ground, our cityscapes would look even worse.

Greedy developers like Trafalgar House 'Investments' Ltd, you mean, Hels? The people who managed to destroy the remarkable Firestone building on the Great West Road between Hounslow and Ealing one day before listing was granted? And then there's the Minimax factory at Feltham, whose spectacular entrance was preserved, but the resulting overgrown mess looks very sad!

I hadn't see the Minimax entrance before, that really is sad.