Even relatively familiar areas of London retain the power to surprise, and I had one of those moments recently on a walking tour with old maps. Just off Borough High Street survives a remnant of Marshalsea: the south wall of the prison yard. 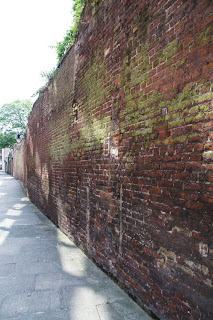 Marshalsea was best known as a debtors' prison, although it also housed navy men awaiting court martial. Its most famous prisoner was Charles Dickens' father, who was held as a debtor. Young Charles famously went to work in a blacking factory to support himself as a result.
Debtors' prisons were strange places, very different to a modern prison. The prisoners, although already in debt, were expected to pay for their accommodation and various privileges such as access to cooking facilities. Many of the inmates' families had no means of support while the debtor was inside, so joined them within prison walls, meaning that Marshalsea was (a rather grim) home to men, women and children. Dickens himself would join his family, all of whom were living inside the prison, for breakfast and dinner. A debtor would remain imprisoned until the creditor was satisfied - or, of course, until they paid off the debt. However, with no means of earning money and the debt increasing while they were unable to repay it, few people could simply settle their debts.
The prison moved to this site in 1811, having previously been located a little further north. It closed in 1842, and most of its buildings were later demolished. This wall alone remains, but no longer closes off prisoners from the outside world. Instead, you can walk where prisoners once did along what is now Angel Place; step through the gate and you enter the pleasant and peaceful St George's Gardens.
- July 13, 2011

The grimness and hopelessness of it all were vividly brought to life in the recent BBC version of Little Dorrit. What about the inside of the wall - have any of the inhabitants left their mark? Are we likely to find a genuine "Charles Dickens" carved into the brickwork?

I didn't notice anything carved into the brickwork - it might be worth a closer look. The bricks are not in the best condition, so any graffiti may not have survived.