Sixteen London Underground stations have just been listed on the advice of English Heritage - the BBC have some good vintage photographs. (One idiosyncracy of the list is that Oxford Circus appears twice: although we think of it as a single station, it has two buildings.) These not the first on the network to be listed: there are 72 in total on English Heritage's National Heritage List. 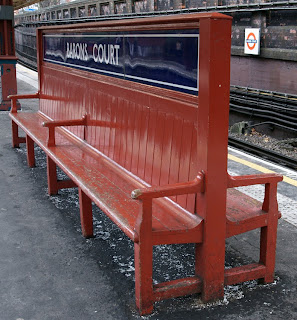 meanwhile Deptford Station, the first urban/London station 1836/1842 built by George Baker & Sons who built part of the British Museum, worked on Natural History Museum, lodges for Kensington Palace, an entrance for Clarence House and the GII listed 'Olympia sheds on Convoys is currently being demolished. Sir Herbert Baker, architect is a descendant.
http://books.google.com/books?id=jeOMfpYMOtYC&lpg=PA32&dq=%22george%20Baker%22%20engineer&pg=PA33#v=onepage&q=%22george%20Baker%22%20engineer&f=false