This morning, London's attention turned to clearing up the mess left by riots. Many volunteers have brought gloves, binbags and brooms to affected areas, a welcome reminder that most Londoners do value their city.

Much of the clearing up, though, was done by the professionals employed by our local councils. By lunchtime, Deptford's most-photographed car had been hauled onto a truck and taken away. Less obviously, road sweepers swept up litter and broken glass, so that for a few hours at least our streets were usable once more. 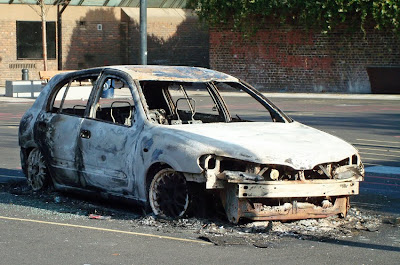 We usually take swept streets for granted. We may complain that people drop litter in the first place, we may grumble about the time the council takes to clear it up, but we expect it to disappear within a reasonable time. However, in the nineteenth century, the people who cleaned the streets were much more visible. The crossing-sweeper in particular was a periodic focus of public discussion.

London's roads not only had litter and dirt; they also had plenty of horse manure. Crossing the street could therefore have been a deeply unpleasant experience, especially in the days before tarmac, but it was usually made more tolerable by the crossing-sweeper who would clear a way across. Many of us probably have a Dickensian vision of a waif with a broom, but people of all sorts and ages might take up this work. The indefatigable Henry Mayhew categorised them into three groups: juvenile, afflicted or crippled, and able-bodied. The third category was further divided, oddly, into male, female and Irish. He also distingushed between the casual and the regular crossing-sweeper.

However, many commentators saw crossing-sweeping as little more than a form of begging. After all, most of the horse manure was carried away by boy 'street orderlies' employed to dart between the traffic with a brush and scoop to collect it before it got squashed into the road surface. W J Gordon describes their career progression: as they grew into adulthood, they would be promoted to cleaning the street surface with broom, squeegee and scraper. The squeegee was essentially the tool we now associated with window-cleaning: 'a mere slip of indiarubber clipped in a slide and fitted with a handle, and lasting for a year in good wear, clearing away slop and mud so effectually as often to leave but a smooth dry track behind.'

The crossing-sweeper and street-orderly are now gone from our streets, but the need for someone to clean them has not disappeared. We are no longer expected to tip those who sweep our roads, but we still owe them our thanks. Whether there's more violence or not, the road sweepers will be busy making London a much nicer place.

Every age brings it's curse - at least the Victorians didn't have to put up with chewing gum, which is no help to roses at all!

Right now I'm glad that I'm not there. As I read it it is hectic, I follow the news, twitter also. I don't understand the point of it all, how did it start.
Best to all who are there, I can't imagine the shiver you get at night.

I'm just back from the market, everyone more friendlier than usual. Deptford Market can make you believe that 'God is in his heaven, all's right with the world'

Hugh, very true! Mounted police come down my street from time to time so we do still get the odd bit of manure (although I don't have roses to put it on).

Glad to hear that, Deptford Pudding - I do love the market.