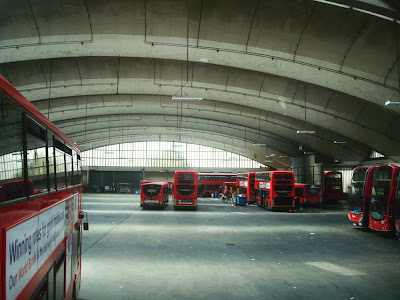 The best-known London architecture from the early 1950s is probably the Festival complex on the South Bank. However, they were just one example of concrete buildings from the period; our mystery tour took us to another, Stockwell Bus Garage. 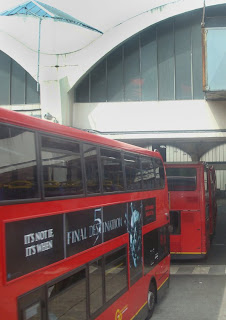 A key reason for concrete's popularity was that following the Second World War, more traditional materials (especially steel) were in short supply. The architects Adie Button and Partners and engineer AE Beer rose to this challenge with flair and imagination: the huge space is supported by arched concrete ribs, making it the largest unsupported area in Europe at the time of building. Between the ribs, skylights throw subtle light onto the vast space below.

In 1988, Stockwell Bus Garage was listed at Grade II*; Will Self has argued that it is London's most important building. While I wouldn't go that far, it is certainly an elegant response to post-war shortages.

Back on the South Bank, the key survival from the Festival of Britain is the equally Modernist Royal Festival Hall. It has not been helped by the later addition of foyers to the facade, and is not held in universal affection. Yet it too was built in a spirit of optimism and innovation; the architects were three young men from the London County Council's own works department, Leslie Martin, Peter Moro and Robert Matthew. When the Prime Minister, Clement Attlee, laid the foundation stone in 1959 he commented that

The exhibition and its festivities would pass into history, most of what was shown would be dispersed, its celebrations would become only memories. But the concert hall would remain and around it would rise buildings worthy to take their place with the best of old London and form part of the replanned London of the future.

The Guardian, reporting on the event, reached its own conclusion on the building:

It is not yet possible to see much of the shape of the building, but the illustrations in a booklet given away at the ceremony make it look handsomer than it has appeared in any impressions printed up to now - handsome, that is to say, in a purely utilitarian way, as a huge bus depot might be.

One wonders if they imagined a bus depot such as Stockwell Garage.

Excellent! Attlee was correct: "the concert hall would remain and around it would rise buildings worthy to take their place with the best of old London and form part of the replanned London of the future".

The architects of both buildings weren't going for classical beauty. They wanted well planned, good quality, modernist buildings at a time of poor morale and shortages.