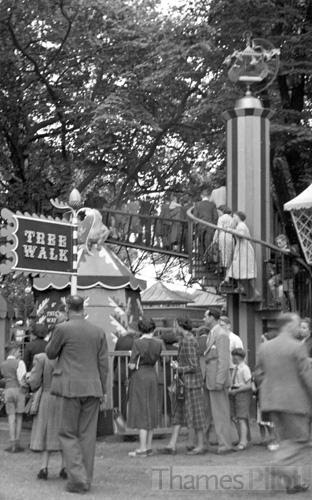 My mum was among the millions who visited the Festival of Britain. Aged six, she travelled up from south Wales and still has vague memories of looking around various exhibits. However, what has really stuck in her mind as a magical experience was her visit to the Pleasure Gardens in Battersea Park, a shuttle-boat away from South Bank.

There were all sorts of attractions in the park including a funfair, Far Tottering & Oyster Creek Branch Railway and the Guinness festival clock. Mum's main memory, though, is of the Tree Walk, an elevated wooden pathway through the treetops. She first walked it by day, and again at night when it was transformed by lights and 'like fairyland'.

An anonymous contributor to the Museum of London's collection of Festival of Britain memories has a lovely story about the tree walk:

I an delighted to see the Tree Walk so often mentioned with pleasure. My husband was the Structural Engineer who aided James Gardner in the design of this. When it was erected, some official remarked that it looked thoroughly unsafe. My husband knew better and to prove its strength, sat on a chair under the tree walk while a test load of 8 tons of bricks was loaded on to it. He invited the official to join him but the offer was declined!

Unfortunately, behind the magic was a more familiar story of government parsimony, over-spending and recriminations. The story is told by a Treasury Memorandum: originally, the Gardens were to be open for five years, run by a Government-sponsored company which could borrow £1 million from central government and London County Council. However, treasury officials were unimpressed. As one commented,

The estimates of cost are not worth the paper they are written on. Everyone with any experience must know that there will be a large excess over the estimates, especially if the Government is known to be standing behind the scheme. I feel in my bones that this is not the sort of scheme which Government in this country can make a success of.

The scheme was therefore scaled back to one season; there was opposition to cutting it altogether for fear that would make the Festival too high-brow and the South Bank too crowded. 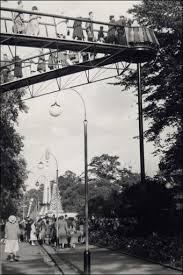 Unsurprisingly, costs nonetheless soared. The gardens opened nearly four weeks late, at the end of May 1951 - and fortunately were a huge success. Six million visitors had been expected; eight million actually turned up. It was agreed that the gardens would stay open for three years, continuing until 1953 for the Coronation.

After that brief, shining season, things went wrong once more. 1952 saw a huge drop in visitor revenue, and despite a cut in admission prices 1953 was even less successful. The gardens closed and Battersea Park was reinstated, although the council kept a few features and a small funfair. Since they received money from the government for reinstatement costs and were able to lease out the fair, the council were happy - but the Treasury was not, having lost £1.25 million.

The funfair continued for many years. Tragically, the Big Dipper finally closed in 1972 following an accident in which five children were killed. The rest of the fair closed two years later.

Images of the Tree Walk from Wandsworth Council, via ThamesPilot which has more images of the Festival Gardens here, and BBC London's slideshow here.

My apologies for spotting this so late in the day - but have been away (Berlin).

In the early 70s, I wandered around London courtesy of Red Rover and Twin Rover transport tickets, and I remember going to Battersea Park. The Tree Walk was still in place then, and I can remember how much I enjoyed it (more than the funfair, and as much as the coloured fountains).

We used to go back time and again, my brother and I. It was at its most marvellous at dusk, when the lanterns in the trees lit up and the ground seemed a long way away.

We couldn't stay too late 'cos we were both quite young and had to jump on the bus back to Tottenham...

I'm assuming that we went on the original and not some pale shadow? Any ideas?

I hope you had a good trip!

I haven't been able to find out when the tree walk closed down, but it sounds like the original was still there when you visited. I didn't realise it had lasted so long - thank you for that.

I have just stumbled on this as I was looking for photographs of the tree walk.

I remember the tree walk from the early 70's although I was very young still.

We were on the big dipper the night before the accident - scary!

I remember the walk being there much later on though.

Are these your photographs?
Linda
x

Hello Linda, thank you for your comment - it's great to have more confirmation that the tree walk lasted so long.

I'm afraid the photos aren't mine, they're from a couple of websites linked at the bottom of the post. Both have more photos of the Festival Gardens, although images of the actual tree walk seem surprisingly scarce.