As the Museum of 51 highlights, a massive range of souvenirs were sold at the Festival of Britain. One of the most popular was the Festival Crown, a five-shilling coin specially produced for the event. Two million were struck; I'm lucky enough to have one, brought back as a memento by my mother. 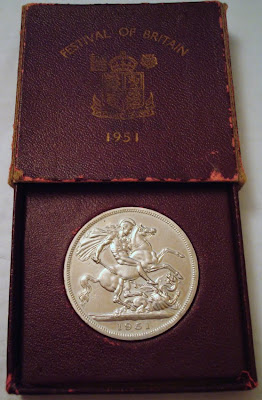 The copper-nickel coin has George VI's head on one side; on the other is St George, wearing nothing but riding boots, helmet and cloak, slaying a dragon. A small leaflet inside explains why the crown was particularly appropriate:

FESTIVAL OF BRITAIN CROWN PIECE
The first English Silver Crown piece was minted in 1551. Four hundred years later, on the occasion of the Festival of Britain, the Royal Mint has issued a Crown piece, bearing on its edge the Latin inscription MDCCCLI CIVIUM INDUSTRIA FLORET CIVITAS MCMLI - 1851 By the industry of its people the State flourishes 1951.

If the change from silver to base metal seems a status drop for the crown, it's no worse than a much earlier change. Henry VIII introduced the crown coin in 1526, when it was made in 22-carat gold. However, as the leaflet explains, it became silver 25 years later.

Because of its large size, the crown fell out of common use: generally it was struck as a commemorative coin. The last crown was minted in 1965; six years later, of course, decimalisation meant that crowns ceased to be part of our currency. Commemorative coins of equivalent value (25p) were later issued, but inflation has struck and now £5 coins are minted instead.

Normally commemorative souvenirs can be a bit tacky. I suppose this is because they have nothing to do with the event itself, except for the date painted on the side of the object.

But the document that came with the commemorative coin made a nice attempt to tie the crown in historically. "The first English Silver Crown piece was minted in 1551. Four hundred years later, on the occasion of the Festival of Britain, the Royal Mint has issued a Crown piece, bearing on its edge the Latin inscription, 1851. By the industry of its people the State flourishes 1951."

First, I love this sight and it has been a useful reference for a book I am writing. Second, I am a transplant (from Philadelphia - US) and have been here three years. One of the things I brought over with me was one of the Festival of Britain Crowns, one my father gave my mother when they were going to University here in London. They married a year later. I, in turn, gave it to the woman I was courting here (a Brit chaplain) and I, too, have married her just a little over a month ago. Did the coin have anything to do with this?

Anon, what a wonderful story! Perhaps the Crowns do have hidden powers...