From the archives: Deptford and fingerprints

Deptford has a little-known place in legal history. A horrific crime on the High Street led to the use of a then-novel form of evidence. 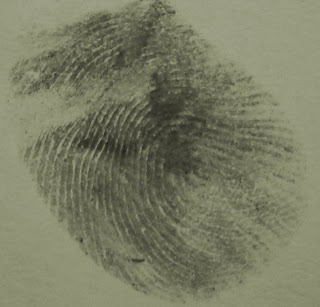 Although their murders are forgotten today, the killings of Deptford residents Mr and Mrs Farrow were notorious at the time – and the subsequent trial involved the first use of fingerprints in a murder case.*

Early on Monday, 27 March 1905, 70-year-old Thomas Farrow was found dead in the oil and paint shop he managed at 34 Deptford High Street. He had been killed by half a dozen blows to the head, inflicted with a blunt instrument. His wife Ann was unconscious in the bedroom with similar injuries, and would also die five days later. There was a clear motive for the murder: every Monday morning, the owner would visit to collect the week’s takings of about £12. Sure enough, the cash box was empty – except for a dirty fingerprint.

Witnesses had recognised two brothers, Alfred and Albert Stratton, at the scene of the crime around the time of the murder. The evidence against the Stratton brothers was circumstantial: mainly that they had been seen leaving the shop at about 7.15 on the morning of the murders. (There was also a questionable confession from Albert to a gaoler). However, towards the end of the trial came evidence from Detective Collins, the Met’s expert witness on fingerprints.

Fingerprint identification was a fairly new science and needed to be explained to the court. Collins began his evidence by outlining the history and methods of fingerprinting at Scotland Yard:

I have been employed in connection with the Finger Print Department since the formation of the finger print system in 1901—previous to that I was employed for two or three years on the anthropometric system, which was a system based on certain body measurements and embodied for part of the time finger prints—I have studied the works on the subject by Mr. Francis Galton and Mr. Henry—so far as I know, those are the only works on the subject of finger prints—at Scotland Yard we have now between 80,000 and 90,000 sets of finger prints, which means between 800,000 and 900,000 impressions of digits—in my experience I have never found any two such impressions to correspond—in comparing the impressions we proceed to classify them first by types and sub-types, and then by counting and tracing the ridges—that is when we have complete prints of the whole finger; we then compare what are called the characteristics—in my experience, if the type or sub-type or the number or tracing of the ridges differ, they cannot be the prints of the same finger—if those matters agree we then proceed to compare the characteristics—in my experience, the highest number of characteristics which we have ever found to agree in the impressions of two different fingers is three —that occurred, to the best of my belief in two instances; it may have been three, but not more—we have never found as many as four.

He then explained how he had matched the bloody fingerprint to Alfred Stratton’s right thumb. There were eleven matching characteristics and no differences, so he concluded that ‘from my experience I should say that it is impossible that those can be prints of two different digits’.

Unsurprisingly, such controversial new techniques did not go unchallenged. The defence were advised by Henry Faulds, one of the pioneers of fingerprint identification: while convinced of the value of fingerprints, he disapproved of the way Scotland Yard used them, particularly in basing identification on a single print. They called as a witness Dr Garson who had been employed by the Home Office to organise the identification system (when it used a whole range of anthropometric measurements; it moved to fingerprints alone in 1901). Garson testified that he had had Inspector Collins as a pupil in one of his classes. He then went on to present an analysis of the fingerprints in the case, suggesting that in fact there were significant differences between Alfred’s and the one found on the cash box. However, his evidence was clearly less compelling than that of Inspector Collins (it didn’t help that he had written to both sides offering to give evidence for them): the brothers were found guilty of murder and executed.

Faulds’ doubts did not disappear after the trial. He felt that fingerprints had their place in record-keeping: one full set of prints could be matched to another to confirm a prisoner’s identity, but that was a very different thing to using latent prints for identifying criminals. (Unlike prints carefully taken in ink at the police station, latent prints are often incomplete, distorted or unclear). In particular, he believed that Scotland Yard’s ‘experts’ were unscientific. That same year, 1905, he complained in a pamphlet that identifications were made by ‘subordinate officials untrained in scientific observation.’ More fundamentally, he pointed out that it was assumed but had not been proved that no two fingerprints were alike (in fact, it still hasn’t been proved). However, such doubts did not prevent fingerprint identification from growing in importance, and it remains a significant form of evidence in the criminal courts today.

* Fingerprints had been used in a trial for the first time three years earlier, when Harry Jackson was convicted of burglary after leaving his fingerprint on a newly-painted windowsill.