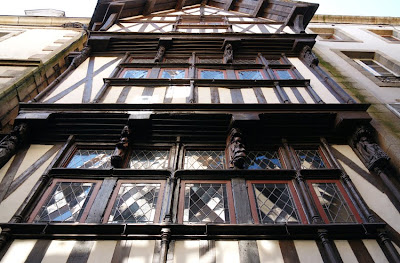 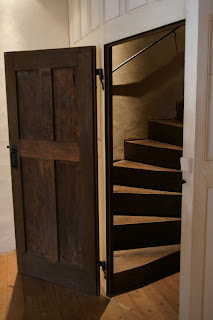 The fifteenth and sixteenth-century houses of Morlaix, on the northern coast of Brittany, are unique. Wealth from the linen industry and maritime trade combined with traders' experience of Spanish homes in Cadiz to give birth to the maison a pondalez (gallery house), also known in French as maison à lanterne or lantern house.

While a house arranged around an open central courtyard might be well-suited to southern Spain, it obviously needed some adaptation to the colder, wetter climate of northern France. There were also space limitations for Morlaix's terraced townhouses. The result was a house with rooms facing onto the street and further rooms at the rear; between them was a courtyard covered with a 'lantern'. This high central room had a large granite fireplace, while an oak spiral staircase and galleries linked the front and back rooms. The pillar supporting the spiral staircase was usually richly carved. 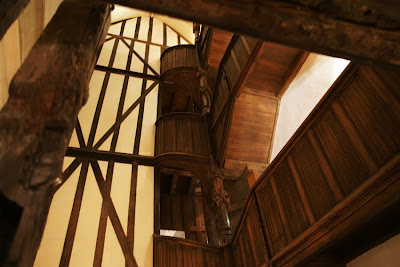 Some of these houses were also shops: the front room on the ground floor would be the commercial premises; the higher rooms, back of the house and courtyard were the private residence. 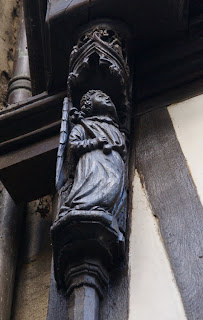 Two traditional houses survive and are open to the public. I visited one of these, on the inaptly-named Grand'Rue. It is actually very narrow, and now pedestrianised; there is even less space between the overhanging upper floors of the buildings. However, most are enhanced by wooden carvings, often of saints. They are perhaps the best exterior clue to the extraordinary oak-and-granite interiors hidden within.

Further reading: the other house open to the public, La Maison de la Duchesse Anne, has an interesting site with a great deal of historical detail about these houses.
- August 31, 2011

Having a central courtyard covered with a lantern is a brilliant idea. And in church architecture in northerly climes, not at all rare.

Yes, the fireplace could heat the whole house.

isn't this house like the one at Smithfield / Little Britain?