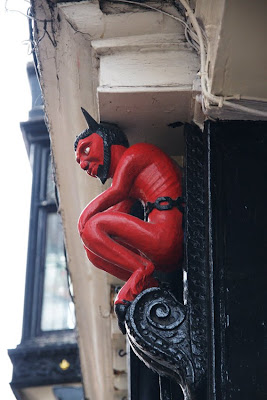 No one is quite sure why an apprentice printer was called a printer's devil, although there are a number of theories. Perhaps the most popular is that of the devil who lurked in every printer's premises, inserting errors into the type; when they weren't blaming him, more senior printers would blame the youngest apprentice instead. The printer's devil takes a more literal form in this carving on a former printer's shop in Stonegate, York. If there are any typos in this post ... blame him! 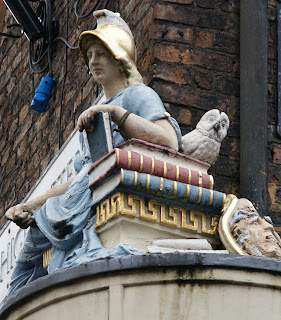 The popularity of such visual signs is often connected to illiteracy, but both this and another of Minerva remind us that there were other reasons too. Minerva, goddess of wisdom, sits leaning against a pile of books with her owl at her elbow. Both books and owl remind us that she was goddess of wisdom and drama: hence her place on High Petergate, once known for its bookshops.

It is likely that most customers of both printers and booksellers could have read textual signs (although their servants might not), but these conspicuous carved figures were especially useful before buildings were numbered. Addresses could be given as, for example, 'at the sign of the printer's devil'. The carving was also an advertisement and a way of catching the pedestrian's eye, just as barber's poles continue to be today.

Email ThisBlogThis!Share to TwitterShare to FacebookShare to Pinterest
Labels: shopping

Caroline: These are brilliant, thank you - I have sometimes been a victim of the printer's devil myself. It's a very long time since I went to York, and don't remember seeing these. I was obviously concentrating too much on medieval churches. It's timely that you should post the devil, since I have just been puzzling over a similarly positioned, but much less devilish, figure on a shop in Herefordshire. To be blogged soon, I hope.

Thank you, Philip - aren't they great! It is easy to miss things in York, there are so many amazing historical buildings and features there. I look forward to seeing your devilish figure.

Minerva looks so real that I think she is about to stand up!
(I followed you here from the English Buildings blog).
Click here for Bazza’s Blog ‘To Discover Ice’