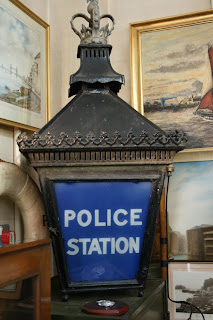 Among the collection in the Thames River Police Museum is a rather fine blue lamp. These are hung in front of police stations, one of those features of English life we take for granted. When, though, did this practice begin?

Blue lamps appeared outside London police stations in 1861. They would spread throughout not only Britain but also the empire: Bahamian police stations, for example, still have these lamps today.

There seems to be some uncertainty as to why the light is blue. Probably it was chosen to match the colour of police uniforms, themselves selected because blue was a fairly neutral colour and clearly distinct from the red of the military. However, it wasn't popular with everyone: apparently, Queen Victorian objected to the lamp outside Bow Street Police Station. Every time she went to the nearby opera house in Covent Garden, it reminded her of the blue room in which Prince Albert had died. Bow Street was therefore unusual in having a white lamp.

Whatever its origins, the blue lamp became a symbol of British policing and in particular of its positive features. Dixon of Dock Green gave his monologues under this light; he had made his first appearance in a 1950 Ealing Studios film titled The Blue Lamp . However, with station closures and greater scepticism about policing, will the blue lamp continue to maintain its symbolic status?

Sunbury police station still has it's antique elaborate lamp on it's own lamp-post. Of course, the burglars around here are very civilised as the station only opens from 9 to 5, Mon to Fri.

You are right, blue lamps outside police stations are as British as red phone boxes. Nice to have a date for when this practice started. Here at http://www.londonremembers.com/memorial/3276 we've found two blue lamps acting as memorials.

The blue lamps burn also burn throughout the Commonwealth Caribbean not only in The Bahamas.
In The Bahamas a police award is even named after the blue lamp.

In Aberdeen there is a pub and music venue in a former Police Station. Very appropriately it is called the Blue Lamp

It might be of interest to your readers that the earliest mention of a police station Blue Lamp that I could find in the British Newspaper Archive, dated from 1870 in Oxford, England. On Saturday 17th December the “Oxford Chronicle and Reading Gazette” reporting a decision to close the Carfax police station in the following year, deposed that “Councillor Towle [said] the other day he followed a thief up to Carfax but he could find no policeman there. The ex-Mayor suggested that the last speaker should have looked out for the blue lamp.” © 2020 Findmypast Newspaper Archive Limited. Of course, my search cannot be considered conclusive.