Find us near the pump...

I love this little newspaper advertisement from 1702, because it reminds us not only of Deptford's manufacturing past but also of the difficult of giving addresses before street numbering.

AT Deptford in Kent, is a covered Ropewalk having all conveniences belonging to it to be let, or the said Ropewalk with some Houses to be sold. Information may be had if desired of Mr Tho. Sewel at Mrs Gerrards in Bishpsgatestreet near the Pump at the corner of Threadneedle-street.

In fact, the first known street numbering in London was only six years away - in Prescot Street, Goodmans Fields. The idea took off later in the century, with many streets numbered but each in its own sometimes idiosyncratic way. Greater standardisation of London numbers wouldn't happen until the mid-nineteenth century, thanks to the Metropolitan Management Act 1855. It allowed the Board of Works to control both naming and numbering of streets. The Post Office saw its chance to make postmen's work less complicated, and put pressure on the Board to simplify addresses.
Although designed to make postal deliveries easier, street numbering must also have been a real benefit to anyone trying to find an unfamiliar building. No longer did they have to follow complicated and ultimately vague directions referring to local landmarks or pictorial signs!
As for a ropewalk, it was indeed a place where ropes were made. The long, narrow covered path would be used to twist long strands into a length of rope. The standard length of a Royal Navy rope was 1,000 feet so the need for a special space is evident - although our ropewalk was probably producing material for private ships. Deptford, as a hub of maritime activity, would have had a huge appetite for the completed goods.
This activity is often recreated at one of Brittany's historical events, the Bread and Harvest Festival at Plouguenast, where I took the photographs below. The ropemaker is first testing the individual strands, before twisting them together in a single strong rope. (Read more about the process here.) 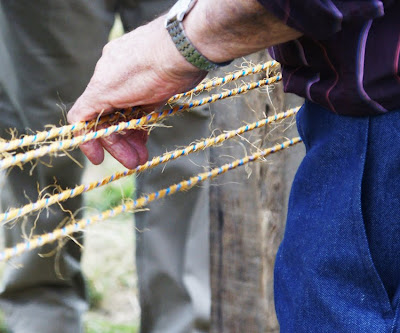 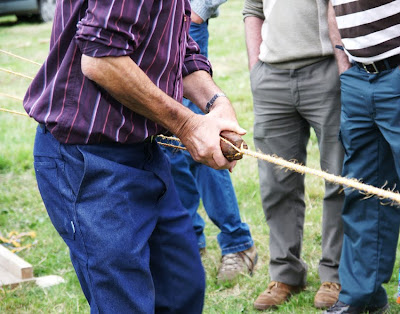 There is a Rope Walk in Sunbury which runs beside an ancient wall between French Street and The Avenue. Interestingly, there is a dogleg in the path not far from the start, so I should imagine all ropes made in Sunbury were instantly recognisable by their unique shape!

Nowadays hardly any shops have the number on the front, making it very difficult to find the place you want in a long High Street. Action now!

Hugh, I'm intrigued by the dogleg!

I had exactly that problem a few days ago, Chris - perhaps it's time for the Post Office to make a fuss again.

The street numbering idea only took off later in the mid 18th century? Even if each street was numbered in its own idiosyncratic way, it was huge progress. We are tempted to think that "how things are today" is how they always were. But that was clearly not so.