When you're a successful food-and-drink market, and somebody suggests opening a new food-and-drink market next door, you might feel you have grounds for objection. When you're as venerable as Borough Market, those grounds can be pretty special.
Vinopolis are seeking permission to open a food and wine market a very short walk away from their older neighbour. Borough Market have an unusual weapon in their armoury, however: an Act from 1756 which threatens a forty-shilling fine for

any poulterer, country chapman, lader, kidder, victualler, gardener, fruiterer, fish-seller, or any other person or persons, [who] shall sell, utter or put to shew or sale, by way of hawking, or as a hawker, or otherwise, any beef, mutton, lamb, veal, pork, poultry, butter, cheese, fish, fruit, herbs, oatmeal or other victuals, or provision whatsoever, in any private house, lane, alley, inn, warehouse, street, stall, common passage or other place or places whatsoever, within one thousand yards of said Market. 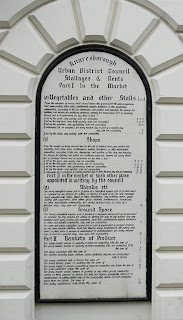 It's unlikely that the argument would be legally watertight (after all, you'll find a lot of places including inns which sell food nearby). However, as the market trustees have pointed out, it's a strong indication that Parliament didn't want Borough to get an unexpected competitor next door.
Markets have never been able to set up just anywhere and were usually established by charters. Borough Market dates back to the thirteenth century, but was closed by Parliament in 1755 because of the traffic congestion it caused. Local residents raised money and bought a new site (still used today), hence the need for legislation in 1756.
Market rules can seem to be a historical curiosity: the list of fees on display at Knaresborough (pictured) is no longer accurate! However, as Borough have demonstrated, these ancient provisions are not necessarily redundant just yet.
Read the full story of the market dispute on the LondonSE1 website.
- September 14, 2011