From the archives: Lyon's cooking 'mothers'

Three years ago, I visited Lyon for a conference - but found the time to enjoy its local food specialities too! Professional female chefs had a huge impact upon the city's culinary reputation, and their influence is still apparent in French cuisine today. 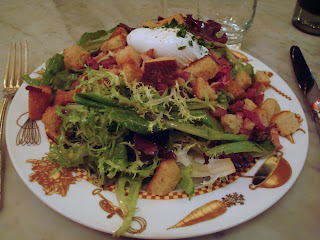 I've already described some of Lyon's specialities: the traditional cuisine is based on tasty food made from good ingredients. Lyon has had a reputation for gastronomy since Roman times. However, much of its recent renown comes from its great chefs of the late nineteenth and early twentieth centuries: the mères. (The word literally means 'mothers' but was also used as a respectful title).
Lyon suffered badly in the French revolution. In consequence, the bourgeois of the city preferred to do business over a meal at home, and women became used to cooking for others. Stendhal commented on the fact, and on the perfectionism and talent of such women: 'These gentlemen have women chefs, not male chefs ... I saw a touching spectacle, one of these girls, a fat plain woman of forty, cry with joy for a duck with olives: be assured that in Paris we only know an imitation of that dish.'
These women chefs later moved from private homes to their own restaurants. Their manner was often gruff; some were criticised for always serving the same dishes, but they argued that this was essential if they were to perfect them. One of the most notable such women, MèreFilloux, declared that 'the preparation of a dish demands years of experience. I've spent my whole life making four or five dishes, so I know how to make them, and I'll never make anything else.' That didn't mean that her menus were boring: for 3.5 francs she would serve you a charcuterie starter, truffled chicken, oven-baked fish quenelles in prawn butter, artichoke hearts with truffled foie gras, cheese, ice cream, desserts and wine.
Filloux's pupil Eugénie Brazier became the first woman to hold three Michelin stars - in 1933, over 70 years before Anne-Sophie Pic would repeat the feat - and was the first person ever to hold six stars (three stars each in two restaurants). She in turn would have as her apprenticePaul Bocuse, now one of France's greatest chefs. When there's yet another tired discussion of why women supposedly don't do well in professional kitchens, it's worth remembering the women of Lyon whose influence over the finest of French cuisine is still apparent.

Thank you, Caroline, for unearthing this shamefully neglected piece of history. Paul Bocuse apprenti d'une femme - wonder why that's never pointed out ...
Yes, Lyon suffered horribly in the Terror, losing swathes of its justly-celebrated artisans to various trumped-up charges ('let's have a revolution ... I know, let's scupper the economy first by ridding ourselves of all the skilled workers!') or emigration.
All the gastronomic detail has put l'eau à la bouche, so off to the Cours in pursuit of lunch ingredients.