When I began photographing ghost signs in Brittany, Dad was baffled at my interest in bits of old paint. Soon, though, he was stopping the car willingly so I could photograph them, and then asking what they were. Now, he has sent me a sign from Plestan which he spotted and photographed himself. 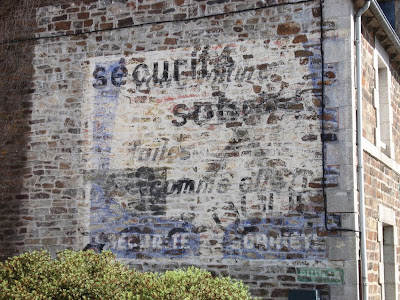 The sign is a palimpsest, but the key message can still be deciphered: 'Sécurité sobriété' (safety and sobriety). This anti-drinking campaign began on Parisian public transport in 1955. Within a few years, it spread throughout France and the roadside signs emphasised the dangers of drink-driving.
The earlier advert is a design with a blue ground and a large glass; the slogan is at the bottom. (A similar sign with a different slogan can be seen here). The wording inside the glass reads 'Votre voiture est sobre - faites comme elle': roughly, 'Your car is sober - be the same'. The slogan was familiar to drivers in 1966 [PDF], so this sign probably predates that. Research published that year found that the signs were difficult to read, so either their message was lost or they were counterproductive in terms of road safety!
That research seems to have had an effect as the second version is much more emphatic. The slogan is emblazoned in heavy black letters across the top of the sign. It appears to be the 'falling glasses' design here, suggesting that the black cross and square also faintly visible belong to a third advert.
Altogether, not a bad first find!
- September 13, 2011

It's definitely catching, once I explain it to people they normally have a discovery by the next time I see them. Keep spreading the word!

Yes, I've had some nice conversations with local people while photographing signs. Often they've not really noticed them before or realised how old they are.

The anti-drink-driving advertisement that I saw most often when driving through France was of a man sitting at the wheel and pointing a gun at his head as though to commit suicide. The "gun", however, was a wine bottle.

This sign had strong competition from Vin Fou Henri Maire, so that both are now inextricably linked in my memories of our journeys through France.

Damn it... I always assumed that the French knew how to drink sensibly and safely.

But no advertising campaign would be mounted, unless there was a real problem to be tackled. This anti-drinking campaign, which began on Parisian public transport in 1955, was responding (presumably) to an increase in drink related injuries.

One wonders if the advertising campaign worked and if there was no further need to warn the French population about the dangers of drinking.