I've previously discussed facadism, one type of 'conservation' which maintains the facade while losing the original structure behind. Here is another piece of preservation which loses some of the original context. 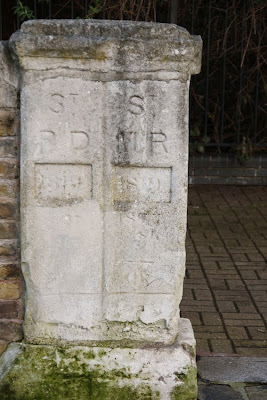 This parish marker on the Thames path marks the boundary between St Paul's, Deptford and St Mary, Rotherhithe. It was also the line between Kent and Surrey. I particularly like the economy of adding dates below the original one, rather than replacing the markers.
However, the stone has been moved from its original site, where it formed part of a bridge; it was put in its present position in 1988. That seems a strange fate for something whose precise location was so important. The small length of wall mid-path is also rather incongruous. 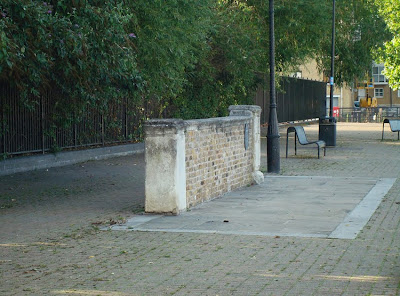 That is perhaps a little grudging, though. The most important factor is that when the bridge went, the stone was not discarded but remains beside the river as a tangible survivor from Deptford's (and Rotherhithe's) past.
- September 27, 2011

I agree, albeit it reluctantly, with your final sentence. A boundary marker should stand on the boundary it marks and to move it somewhere else is to damage it by taking away from it something essential to its nature. On the other hand, it is in many cases better to preserve it, albeit in the wrong place, than to destroy it altogether.

So often, new ideas or new technology can be applied to make a well examined artifact reveal fresh information previously hidden. When we destroy such objects, we do not know what potential knowledge we are destroying with them.