Deptford's annual art festival enjoyed unseasonably hot weather today, and I did rather wilt as a result! However, between lurking in the shade and drinking cool drinks, I found plenty of artistic activity. 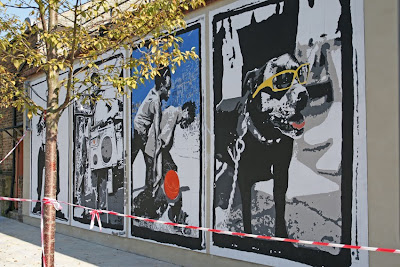 The new mural in Douglas Square is progressing well. While some panels are finished, one is currently being worked on. It's interesting to get a glimpse of how the artist Peter Anderson is converting photographs into wall paintings. 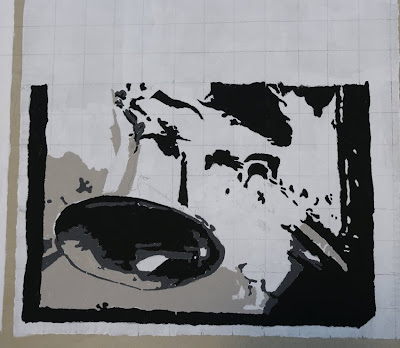 Back inside, the cool and shady Utrophia space was filled with Ben Parry's Deptford Machine. Its clanking sounds and slow, complex movements were rhythmic and soothing: an unusual and restful contrast to the lively market just outside. Photographs can't do justice to the movement of the piece, so do take a look at the video on Crosswhatfields? as well. 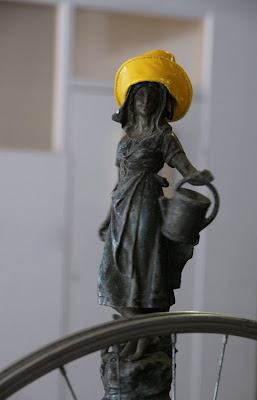 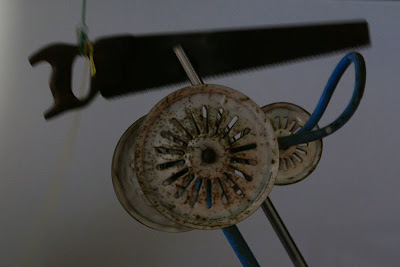 Many galleries are open for the weekend, and there was plenty to see on Creekside in particular. Soon, though, I was outdoors again for the 'make and bake' session held by The Deptford Biscuit. Presumably sitting in the sunshine wasn't the original plan for an October event! 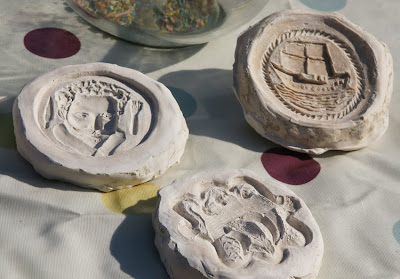 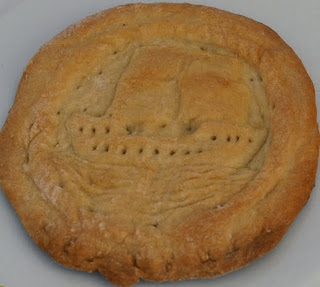 These wonderful ship's biscuits are very appropriate for a Deptford festival. Not only were such biscuits manufactured here, but the designs added by artists Bridgette Ashton and Nicole Mollett tell the story of the Golden Hind. At the end of its journey, it moored at Deptford where Sir Francis Drake was knighted by Elizabeth I. After many years as a tourist attraction, the ship decayed and its timbers were converted into souvenir items including a chair. These events are depicted on the biscuits.
At today's session, we decorated the biscuits. What my effort lacks in artistry is compensated for by the pleasure I had doing it! 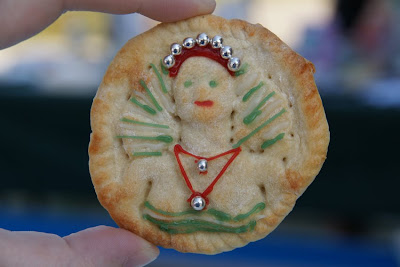 I fear you might have been sent to the Tower for lese majeste - ships biscuits would have been a luxury there!

Especially the high-protein ones with weevils!

I expect the sailors needed those weevils ... But I'd definitely snaffle that biscuit, Caroline - thank you!

I also like that Deptford Machine. It reminds me of the wonderful sculptures (metamechanics) of Jean Tinguely, who had a memorable and noisy exhibition in the Tate in c 1981 and who, with his wife Niki de Saint-Phalle, designed the Stravinsky Fountain near the Pompidou Centre in Paris. I think Tinguely is one of the 20th-century greats, but he's not much mentioned now.