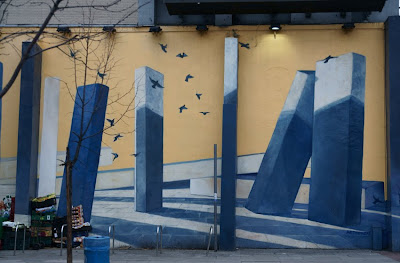 A wall on Deptford Broadway is the home of Deptford Marbles. Its creator, Artmongers, say

The starting point of this artwork was to turn the pillars on the wall from obstacles to features, creating a landscape reminiscent of a stonehenge or a set of dominoes. On this old Roman road, the mural is a reminder of time passing and how it changes everything humans build.

Unfortunately, the explanation adds to the feeling that this is an opportunity slightly missed. Although the mural is pleasant enough, the trompe l'oeil effect is fun, and I rather like the birds, there is little sense of place. A slight allusion to the Broadway's past as part of a Roman road is not a real engagement with either the history or the cultural diversity of the area. Which raises the question, just how should murals relate to their location? 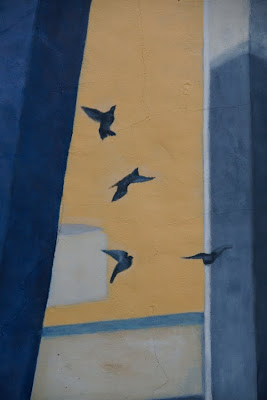 Have you been in touch with london mural preservation society who are doing work on all these murals including walking tours?

It's an intriguing and attractive piece of art, but as a Deptford mural, then, like a joke that has to be explained, it fails to make it's point. IMHO.

Sam, thank you for the suggestion. I missed their local mural walk recently, but luckily Transpontine did a really good post on it.

Hugh, I think you've summed it up perfectly!

Its a poorly executed piece with an inscrutable message. I stood and looked at it recently and was joined by a few locals who didn't like it or understand it. Very poor in comparison to murals and street art that I have seen recently in Spain. The necklace and tie on the square off the High Street is at least has some humour to it. Amateurish at best.

It's even stranger now that they have added bits so that some of the uprights look like letter Ts. It doesn't make a word, but looks like it should.