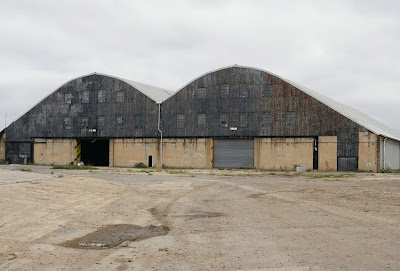 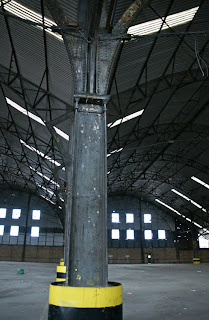 Olympia Warehouse in the former Deptford Dockyard has the distinction of being Grade II listed. Its exterior will certainly appeal to lovers of industrial heritage and corrugated iron, but the reasons for listing it may not be obvious at first sight.
Built in 1846 by George Baker & Son, it is of distinctive iron-framed construction: the original wrought- and cast-ironwork is still visible inside. Originally, the two spans covered slipways, allowing ships to be constructed within. They led into the dockyard basin (now filled in) rather than directly into the river. While the building now has a concrete floor and its more recent use was simply as a warehouse, the slipways are intact a little below current ground level. Only one other such shipbuilding shed survives, at Chatham.
The future of the warehouse is, according to the current plans, as a cultural space. It certainly has a distinctive atmosphere and presence which provide a vital connection to the dockyard's past, and with sensitive use would be a real asset to the area. Thoughtful use and an appropriate setting will be vital, however, for this significant and special piece of Britain's shipbuilding heritage. 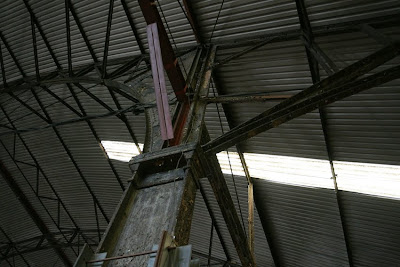 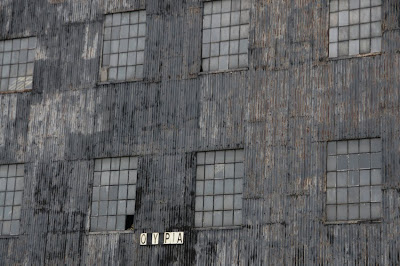 Hmm. Looks like the ideal place to store ARTEFACTS.

In 2005 English heritage demanded that the view for the Olympia from the river be preserved. The current development plan ignores this advice. The slipways beneath the Olympia building were in use for less than 25 years, having been built in 1845 the yard closed in 1869. John Rennie's bain and caisson gate are like to survive as the Basin mouth was constructed from 7 cubic feet blocks of stone. With such a majority survival, the slipway covers, the slipways and basin mouth, the basin walls could be repaired and this area truly become a wonderful focus for the centre of the development.

It's a problematic building in terms of development unless it can be related to its former use and has been extensively modified. To conserve it the roof at least would need to be restored, as the contemporary slipways at Chatham Dockyard have been which do not in any case open out on to the dock. The Rogers Stirk Harbour masterplan made more imaginative use of it but the plan did not account for the safeguarded wharf. The Olympia Building may be an appropriate Museum of London outpost on the south bank of the river, if planning obligations support that. It would reflect the site's historical importance and meets the aims of a cultural centre. The developers don't seem to know what to do with it.

The developers do seem to be incredibly vague about how it's to be used - but I love the idea of a museum. There is so much potential in the whole site, and it's desperately sad that the current plans don't make much of it.

Then the local community has to put forward ideas about how it can be used. The developer I spoke to about S106 mentioned money for a community trust, I have seen this in the documents. It may be a way for the Olympia building in terms of local heritage, if there is sufficient support from the developer, the council and other bodies (MOL, English Heritage etc) and would put the history of the dockyard and community at the heart of the development. It would also make a great focus for events and a reason for visitors and residents to tarry a while in Deptford.

I do like this - in addition to the above - which could be part of an S106 agreement for training and employment, especially for young people:
http://www.thisiskent.co.uk/New-centre-teach-maritime-skills-sailors-students/story-13501606-detail/story.html
To view the splendid training pool at the RNLI college referred to in the article here's another link: http://www.rnli.org.uk/tlc_virtual_tour/crew_training/sscpoolside
I may be wrong but I think young (and old) would be queueing up for it and it would be unique to the area.