From the archives: London to Brighton Run

Sadly, I missed the display of vehicles from this year's London to Brighton Veteran Car Run. However, here's a look back at my visit to this fabulous event in 2009. 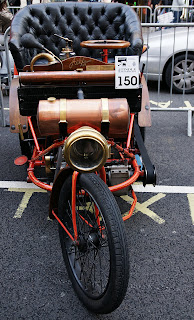 It may be stood on a taxi rank, but this is not a new design for London taxis! Rather, this is one of a surprisingly large number of very elderly cars making the journey from London to Brighton today - yesterday, there was chance to enjoy seeing them parked along Regent Street.